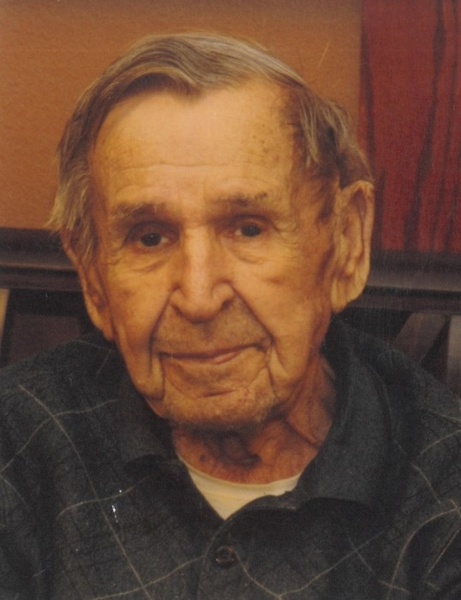 Mass of Christian Burial will be held at 11:30 a.m. on Tuesday, June 5, 2018 at St. Joseph Catholic Church, Mandan, ND. Burial will be at the North Dakota Veterans Cemetery.

Visitation will be held Monday, June 4, 2018 from 5-8 p.m. at St. Joseph Catholic Church, with a Rosary/Parish Vigil at 7 p.m. Visitation will continue at the church one hour prior to the service on Tuesday.

Bill was born at home in Solen on July 27, 1917 to Erasmus John “E. J.” and Margaret (Sturn) Braxmeyer who owned the town grocery store. Bill’s earliest memory was of being in a one-room school in first grade with a chalk board. He said education was very important to his family. In high school, Bill played basketball and baseball and loved to ice skate. At age 19, he met Kathryn “Kay” Lane while attending the University of North Dakota in Grand Forks, where he played hockey while earning a four year business degree and working in a men’s clothing store. They were married June 19, 1939 and Kay lived to celebrate their 77th wedding anniversary. She died on June 30, 2016 at the age of 99.

After college, Bill worked for the Agricultural Adjustment Act (AAA) in Fort Yates. He was called to serve during World War II. Bill went to Fort Snelling, MN; Mineral Wells, TX, and Fort Benning, GA before going overseas where he spent 22 months in the Philippines. It was during this period that he was awarded the Bronze Star for participation in 2 campaigns. He entered the army in 1942 as a 2nd Lieutenant and exited as a Captain in 1945.  He, Kay, and their daughter Judy moved to Fort Yates, ND, where Bill worked for a federal agency before moving to Solen to help run the family grocery business. In 1970, Bill went to work for Cloverdale Foods and in 1971 he, Kay and daughter, Corrine moved to Bismarck, and then shortly thereafter to Mandan. He retired from Cloverdale in 1986. A significant event in his life was going on a military Honor Flight to Washington, D.C. in Sept. 2010.

Bill was preceded in death by his loving wife, Kay; his parents; siblings, Rose and Leo; son-in-law, Pete Hoffmann; and granddaughter, Rebecca Jochim.

In lieu of flowers, please send donations in memory of Bill Braxmeyer to the ND Veterans Cemetery, 1825 46th St. or St. Joseph Catholic Church, 410 Collins Ave, both in Mandan, ND 58554.

To order memorial trees or send flowers to the family in memory of William Braxmeyer, please visit our flower store.