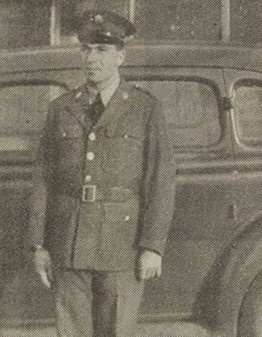 Funeral services will be held at 11:00 am on Friday, June 29, 2018 at Weigel Funeral Home, Mandan, ND with Deacon Doug Helbing officiating. Burial will be at the North Dakota Veterans Cemetery.

Visitation will be held from 4:00-8:00 pm on Thursday, June 28, 2018 at Weigel Funeral Home, Mandan.  Visitation will continue one hour prior to the service.

Walter Robert Buck was born July 21, 1917 in Temvick, ND to Robert and Inez (Sprigel) Buck.  He was the first born of 5 children. He attended the ND State Agricultural College from 1938-1940 where he took up welding and blacksmithing.   Later he taught welding to the local farmers and ranchers after he returned from WWII and was the chief mechanic and welder on the Allmaras farm for many years during harvest time.

After signing up for WWII he trained with artillery with the British in England and Ireland.  Walter fought in North Africa, Tunisia, and went across the ocean to Italy.  It was called the battle of Anzio.  His military specialties were cannoneer, machine gunner, and a tech 3 airplane and engine mechanic.  He was involved in WWII from 1941-45 and a member of the Red Bull Division attaining the rank of Sergeant.

After the war he enrolled in the army reserves when he was called up to serve in the Korean Conflict (1950-1951). While in Korea, he was elected as sheriff of Sioux County, and served from 1951-1952. As a sheriff he met his wife, Jacqueline Allmaras, when he pulled her and her Chevy out of a snowbank.

Walter and Jackie were married in New Rockford, ND in 1953 and settled in Fort Yates, ND where they lived for two years, this is where their oldest children, Carol and Richard, were born.  Later on they moved to their current home in Mandan where two more children were born, James and Diane.

Walter worked for the ND State Lab Health Dept. for 33 years, he retired in 1986.  He started out by inspecting restaurants, then later on did licensing and inspection of feed and fertilizers.  He was also long time member of the Westerners Association and the Richard Blue Earth Solen Legion Post.  Collecting historical items, including guns and other neat items was a lifelong passion of his.  After retirement, Walter enjoyed many hobbies including: blacksmithing, walking his beloved dogs at Ft. Lincoln, and taking trips to see his family, as well as trips to Italy, Ireland, and the Panama Canal.

Walter’s favorite saying was “Time and tide wait for no man.” and his motto that he lived by was “For God, Family, and Country.”

He is preceded in death by his parents; siblings, Charles Buck, Revere Buck, Ardith Buck, and Laurice Duppler; and son, Richard who died in 1982.

The family would like to thank CHI Home Health & Hospice, especially the nurses, Grant and John, and many others.  Also thank you to Dr. Diede, Danette, and Dr. Archuleta.

To order memorial trees or send flowers to the family in memory of Walter Buck, please visit our flower store.