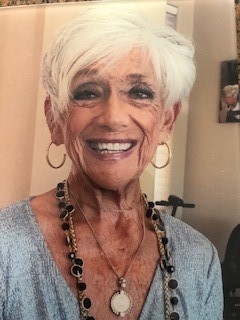 A Mass of Christian Burial will be held at the Church of Corpus Christi, Bismarck, ND, at 10:00 AM, on Friday, September 4, 2020, with Msgr. Patrick Schumacher as celebrant. The committal service will follow at the North Dakota Veterans Cemetery, Mandan, ND.


Vi was born in Napoleon, ND, on October 29, 1937, the daughter of Alois and Marion (Glatt) Weigel. After graduating from Napoleon High School, she worked at Stock Growers Bank, Napoleon, ND. She then worked for the State of ND Department of Vocational Rehabilitation Services, before attending Court Reporting school in San Francisco, CA. There she met Dennis D. Steiner of Miles City, MT, who became her lifetime partner. They married in 1968 and moved to Reno, NV, where they started their own Court Reporting business called Bonanza Reporting. In 1995, they moved to Las Vegas opening a branch office of Bonanza Reporting, which they managed until retirement in 2007.


As a child, Vi had numerous hip surgeries to attempt to correct a congenital hip condition. These surgeries left her with scars on both hips and her left leg six inches shorter than her right leg. She was in constant pain and discomfort but overcame these burdens with a sunny disposition and an infectious smile and personality. Vi was loved by all who met her. Her son Darius was born in 1962. Darius came back into her life in 1984, and since that reunion they have remained an inseparable family.

After Vi retired, she became active in the South Shore Ladies Group becoming a dear friend to many. Here’s how they describe her:
“Vi was always beautifully dressed and dignified yet always had a sparkle of mischief in her eye. She would never turn down a good Cosmopolitan. A beautiful lady inside and out, she was vibrant, kind, and so classy! Her smile and warm personality brought people around her. Despite her constant pain and medical issues, she never showed resentment or bitterness. She was such an inspiration to each of us. And what a poker player!”


In lieu of flowers, memorials may be made to the North Dakota Veterans Cemetery.

Go to www.weigelfuneral.com to sign guestbook, share memories, view the Celebration of Life Video, the funeral liturgy and committal service. The funeral liturgy will also be live-streamed at: www.corpuschristibismarck.com.

To order memorial trees or send flowers to the family in memory of Viola Steiner, please visit our flower store.