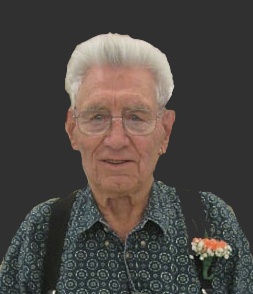 A Funeral Service will be held at 10:30 AM on Friday, May 3, 2019 at Christ The King Catholic Church, Mandan, ND with Rev. Shane Campbell as celebrant. Burial will be at the North Dakota Veteran’s Cemetery.

Visitation will be held Thursday, May 2, 2019 from 5:00-8:00 PM at Weigel Funeral Home, Mandan, with a Rosary/Parish Vigil at 7:00 PM. Visitation will continue at the church one hour prior to the service on Friday.

Tom was born on October 19, 1925 to Peter and Elizabeth (Markel) Frohlich at their home in Crown Butte, ND. Tom grew up in the Saint Vincent area and then helped his dad with farming. In 1945, Tom was drafted into the Army. He served in the Philippines for a while and then went to Japan. He was one of the first of 13 men to enter Japan after the signing of the Peace Treaty. He returned home in October 1946.

Tom married the love of his life, Jeannette Miller, on January 30, 1951 in St. Vincent’s Catholic Church, Crown Butte, ND. They moved to Mandan in 1956 where they raised their six children. Tom was a licensed plumber in the Mandan area until 1986. After he retired, he went to work at the Morton County Court House until 1999. Tom valued faith, family and friends. His favorite pastime was gardening and his lawn. He enjoyed having an Old Milwaukee beer and black licorice.

Tom was preceded in death by his wife of 65 years, Jeannette; his parents, two brothers, Joseph (Frances) and Donald; and three sisters, Elsie (Edward) Friesz, Lucy Wangler, and Vera Frohlich.

In lieu of flowers, the family requests memorials be made to the Christ The King Foundation.

To order memorial trees or send flowers to the family in memory of Thomas Frohlich, please visit our flower store.