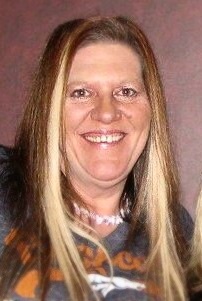 Shanon Marie Noteboom, 52, of Bismarck passed away on April 21, 2018 in a Mandan Care Center after a brave 16 month battle with Glioblastoma Brain Cancer.  A Memorial Service will be held 11:00 am on Friday, May 11, 2018 at Weigel Funeral Home with Rev. Jonathan Walla officiating. There will be a lunch served at the Mandan Eagles Club after the service. She will be laid to rest with her Father, Robert Dean Noteboom, in Corsica, SD.  Family will be receiving friends on Thursday, May 10, 2018 from 5:00 pm to 7:00 pm at Weigel Funeral Home with a prayer service at 7:00 pm.

Shanon was born on December 19, 1965 to Robert and Marjorie (Kilber) Noteboom in Bismarck, ND. She was raised and educated in Corsica, SD and later Moved to Rapid City, SD.  She was married to Nathan Broom and had 2 children, Jessica and Dean.  She obtained her Cosmetology license and became a Hair Dresser. In 2000, she moved to Mandan with her 2 children and worked as a Hair Dresser at Fantastic Sams, Modern Hair Works, and Smart Style where she made some amazing friends that were dear to her heart. In April 2005, she started work as a Caregiver for H.I.T. Incorporated. She loved her job and worked until she could no longer as she was hospitalized due to complications in March 2017.
Shanon also worked for The Coral Bar in Bismarck from 2007 until she was diagnosed in December 2016. She enjoyed meeting new people and made many friends.  She was hard working and rarely, if ever, missed a day of work.  Her word was gold and she could always be counted on. She will be missed by many.

She was preceded in death by her father, Robert Dean Noteboom, grandparents, Martin Noteboom, Arnold and Bertha Kilber, and her brother-in-law, Korey Wagner.

To order memorial trees or send flowers to the family in memory of Shanon Noteboom, please visit our flower store.