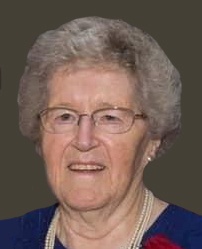 A Mass of Christian Burial will be held at 12:30 PM on Tuesday, August 31, 2021 at St. Joseph Catholic Church, Mandan, ND with Rev. Joshua Waltz as celebrant. Burial will be at the North Dakota Veterans Cemetery, Mandan.

Visitation will be held Monday, August 30, 2021 from 5:00-7:00 PM at Weigel Funeral Home, Mandan, with a Rosary/Parish Vigil at 7:00 PM. Visitation will continue at the church one hour prior to the service on Tuesday.

Rosemary was born on August 12, 1926, the daughter of Albin and Margaret (Yantzer) Bauer. She attended school in rural Morton county.

On June 4, 1946, she married Tony Frohlich, son of Fredrick and Anna (Stocke) Frohlich. Rosemary and Tony lived and farmed the Frohlich homestead where they raised six children. Rosemary loved being with her family and friends. She loved to dance, garden, travel, and sew things for her husband, kids, and grandchildren. The grandchildren especially liked going to “farm grandma’s” for her great German cooking. She also liked to crochet and made blankets for all her children and grandchildren.

Rosemary received her GED on July 26, 1983, at Swainsboro Technical College, GA, where she was told she scored one of the highest scores in that school.

Rosemary loved her children and grandchildren very much. She was a very special woman and wise beyond her years.

Rosemary’s husband, Tony, belonged to the 12th Armored Division and was known as “The Hell Cats”, so Rosemary was known as “The Hell Kitten.” Rosemary and Tony traveled to many different places for Tony’s army reunions. They both loved to go and be with Tony’s army buddies. Rosemary loved to hear all the different stories that were told at the reunions and when Tony’s nephews came for visits and asked him about the war.

Rosemary was the Matriarch on both the Frohlich and Bauer side, and will be greatly missed by her family.

To order memorial trees or send flowers to the family in memory of Rosemary Frohlich, please visit our flower store.