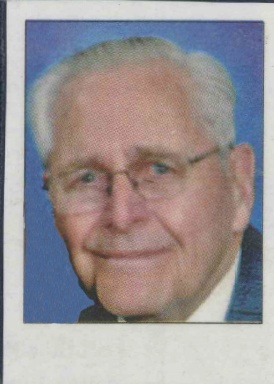 Dick Frohnauer was born on July 27, 1926 in Minneapolis, MN to Joseph and Helen (Michealson) Frohnauer. Dick graduated from Patrick Henry High School in 1944.

After he was discharged, Dick continued his education at the University of Minnesota and then transferred to Minneapolis Business College. Dick worked as a traveling salesman for Libby McNeil Canned Food in Minneapolis. When the crew was dismissed, he transferred to Bismarck where he found a job with the Coca-Cola Company in the Foods Division. He had a successful career and even won sales awards for salesman of the year and a safe driving. While in Bismarck, Dick met DeLores Zander while she was working at the Norwest bank. They were married on June 29, 1968.

Dick was an active member of the community and was involved in a number of organizations such as The Good Neighbor Club, Golden Age Club, and the Serra Catholic Organization. He was a life member for several other clubs including the VFW, American Legion, Knights of Columbus, The Elk’s Club, and The Eagles. He was a Christian man and a member of St. Joseph’s Catholic Church since 1968. Dick spent many hours enjoying God’s creation while hunting and fishing with his father. They would often go to Lake of the Woods with Dick’s nephews to cast line and enjoy the scenery. Dick’s pride and joy, however, was the small garden he tended in his backyard where he grew tomatoes, cucumbers and onions.

Traveling was a major passion. He owned a motor home and would go on weekend camping trips with his wife DeLores and every August, they spent a week at the Driftwood Resort in Walker, MN with the Duxbury side of the family. This wasn’t all they did. In fact, he and DeLores traveled the world, going to Rome, Australia, Hong Kong, Germany, Switzerland, Norway, New Zealand, France, Canada, and every state in the United States of America.

Dick was a gentle and quiet man who will be missed by those he left behind.

Richard was preceded in death by his parents; sister, Marilyn; an infant sister; and brother-in-law, John Duxbury.

In lieu of flowers, please send memorials to St. Joseph’s Catholic Church or to the North Dakota Veterans Cemetery.

To order memorial trees or send flowers to the family in memory of Richard Frohnauer, please visit our flower store.