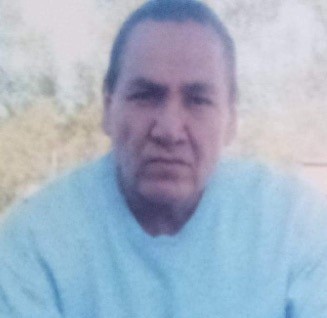 A Funeral Service will be held at 11:00 AM on Monday, April 11, 2022, at the Red Gym in Cannonball, ND with Rev. John Floberg as officiant. Burial will be at St. Gabriel’s Cemetery, Breien, ND.

Visitation will continue at the church one hour prior to the service on Monday.

Myron was born in Ft. Yates, ND on December 2, 1965, to William George Two Bears Sr. and Matilda Melda Conica Two Bears. He grew up in Cannonball where he spent a lot of time with his grandparents, Helen and Charlie. That is where he learned to ride horse and had a natural gift when it came to them. He loved to ride. When his horses started to have colts, he would often gift his family with horses.

Myron attended Solen High School for his academics and later went on to Clearfield Job Corps. In his adult life, he lived many places, from Sioux Falls, SD, to Mobridge, SD, to Bismarck, ND. But no matter where he went, he would always return to his hometown of Cannonball, ND.

Myron was a very special person to many people. He was kind, caring, and loved to joke. He said what was on his mind and told it how it was, yet he knew how to make you feel like he cared. A lot of his caring was showed through humor. He loved to tease, joke around, and laugh. He loved to spend time with his family and friends. He cared deeply for his son, sisters, and many nieces, nephews, and grandkids. We will all miss him dearly.

Myron worked at various jobs, but the jobs he enjoyed the most were labor jobs such as roofing. One of his amazing talents was his beadwork. He would bead anything and everything, and his work was sold all lover North and South Dakota.

He was preceded in death by his parents, William and Matilda Two Bears; his siblings, Diedre, Estelle, Lorna, Raquel, William Jr., and Matthew Two Bears; and grandparents, George Two Bears and Ester Twiggs Two Bears and Charles and Helen Wisespirit.

To order memorial trees or send flowers to the family in memory of Myron Two Bears, please visit our flower store.
Open