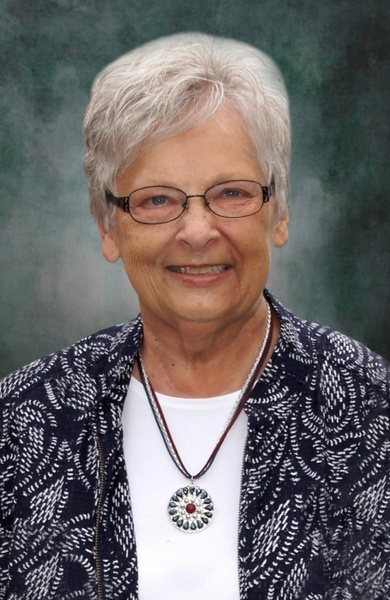 Mary Ann was born February 19, 1946 in Bismarck, ND, the first of 12 children born to Anton and Betty (Lipp) Friesz.  She was raised in Solen, ND where she graduated as Valedictorian in 1964.  On June 19, 1965 Mary Ann married Bob J. Leingang in Mandan.   The two lived their first year of marriage near Bamberg, Germany where Bob was stationed in the United States Army.  They were happily married for 54 years.  While in Germany, they welcomed the first of their four children Cheryl.  In 1969, their second child Clint was born followed by Carrie in 1971, and Cindy in 1975.  Bob and Mary Ann made Mandan their home in 1967.

Family, faith, baking, and a clean house were Mary Ann’s priorities.  She took tremendous pride in supporting her children and grandchildren by giving loving motherly advice right up to the day she fell into her peaceful sleep.  Be good, go to church, pray, make good choices, and be nice to others were words of wisdom she gave throughout her life.  She was known for the best homemade buns in the area, canned pickles, and weekend dessert making for Sunday dinners the family shared even through her four-year illness.  Keeping an updated, clean house made her proud, so much so that after she became ill, she insisted Bob take over many of the household chores since she had done so for so many years.  He graciously obliged and was the most amazing caregiver a wife could ever dream to have.

Mary Ann’s career began in her home until her youngest daughter entered grade school.  She then moved into the work world as one of the most organized and professional administrative staff members a company could hope for.  She was proud to work for ND Job Service in Mandan, Medcenter One Foundation, and American Family Insurance in Bismarck.  She retired in 2010.

She was welcomed into heaven by her parents Anton and Elizabeth (Betty) Friesz, her parents-in -law George and Rose Leingang, and many other loved family members.

To order memorial trees or send flowers to the family in memory of Mary Ann Leingang, please visit our flower store.