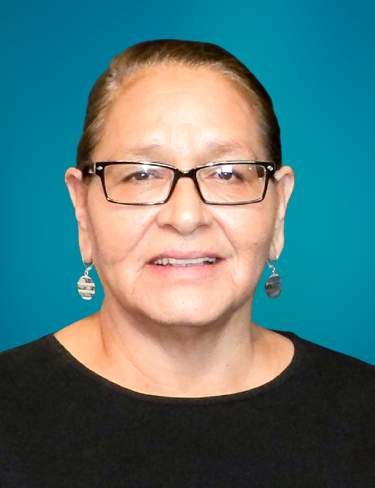 On May 27, 2022, Marcia started her journey to the spirit world to meet our creator surrounded by her family.  Services for Marcia will be held on Tuesday, May 31, 2022 at 10:00 a.m. at the Standing Rock CDC Building in Fort Yates, ND.  A traditional burial will follow and Marcia will be laid to rest with her husband Victor Brave Thunder, Sr.

Marcia entered this world from the union of Verna and Sidney Bailey, born on October 14, 1963.  She was raised in Fort Yates, North Dakota.  Marcia graduated from Standing Rock Community School in May, 1982.  She attended some college at Sitting Bull College.  Marcia married Mark Carry Moccasin and was blessed with Sidney Carry Moccasin and Chase Eagle.  She later married the love of her life, Victor Brave Thunder, Sr. on June 16, 2001.  From that union, she was blessed with another bundle of joy, Baby Vic.  Marcia’s life was full and blessed with her children and grandchildren.  At an early age, it was known that Marcia had a heart of gold.  She loved everyone that came into her life.  Her kindness and compassion were evident with all that she ever did.  She was the person to give her last penny and opened her home to many that needed a place to stay and many took refuge there.  She had many that she considered sons and daughters.  All of you that know Marcia, you know she took that very seriously.  Marcia lived her life in a very humble and modest way.

Marcia had the upmost respect for our traditional culture.  Many teaching came from her, Grandmother, the late Agnes Red Horse, her mother Verna, her Aunt Sissy Good House and Melda Dog Eagle.  Marcia had many teaching from the Sitting Bull Sundance and danced there for many years along with her mother.  Some of those people were still very much a part of her life.  She continued dancing in Minnesota under the leadership of Tom Goldtooth.  Marcia shared her teachings with many.  She was a person that many young women found easy to talk with her and share.  Many nieces went to her and expressed their interest in learning more about our traditional ways of prayer and she took the time to listen and share.  That was Marcia.

Marcia referred to herself as an “Ole Cowgirl” from 4-mile creek.  We all know what that entailed….she loved the country.  Of course, she had a cowgirl spirit in every sense of the way.

Marcia’s sons wanted everyone to know how special their Aunts; Kathy, Bernadette and Marilee were for taking special care of their mother.  We love our Aunts/Moms dearly.

To order memorial trees or send flowers to the family in memory of Marcia Brave Thunder, please visit our flower store.