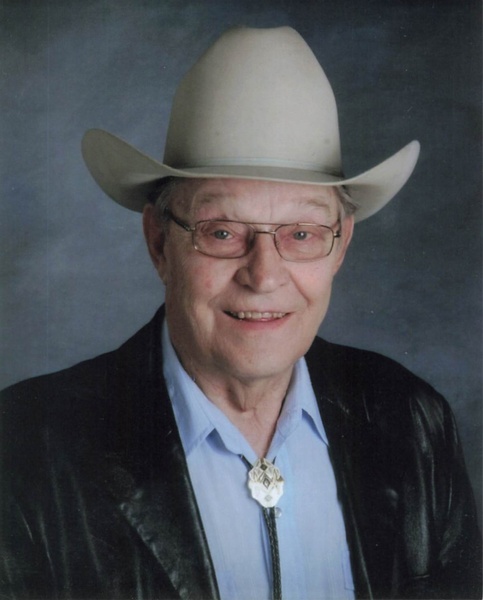 A Mass of Christian Burial will be held at 10:30 AM on Wednesday, January 13, 2021, at Spirit of Life Catholic Church in Mandan, ND, with Msgr. Gene Lindemann as celebrant and Rev. Dennis Schafer as concelebrant. Burial to follow at Mandan Union Cemetery.

Visitation will be held Tuesday, January 12, 2021, from 5:00-7:00 PM at Weigel Funeral Home, Mandan, with a Rosary/Parish Vigil at 7:00 PM. All are asked to wear a mask and follow all social distancing guidelines.

Louie was born in Fallon, ND on May 18, 1934, to Monson K. Schmidt and Anna (Friesz) Schmidt. He was the seventh of eleven children. He was educated in Fallon through the eighth grade where he walked one mile to school (uphill both ways) until he was old enough to take “the kids” (his younger siblings) to school with the horse and wagon. On October 20, 1958, Louie married the love of his life, LaDora Schmidt, at St. Anthony Catholic Church. Louie and LaDora made their home on a farm one mile east of Fallon where they raised their six children. During Louie and LaDora’s retirement, they enjoyed traveling to craft shows where they both sold their handmade crafts. They kept themselves busy with “Granny’s World” craft business until LaDora’s unexpected death in 1998.

After losing his wife of nearly 40 years, it took some time for Louie to venture out and make new friends. Louie began to enjoy going to the Lonesome Dove to play Bingo where he was known as Uncle Louie to many. In 2007, Louie met a special friend, Myrtice Ecklund, on a blind date. During the next 13 years, they enjoyed companionship and some traveling.

Louie was a hard-working man, who appreciated and was satisfied with all that he had. Buying something new was rarely an option. Rather, Mr. Fix Anything, tried to fix everything. Louie’s motto was “if a man made it, a man can fix it”.

To all who knew him, Louie was a loyal and sincere friend. He left a positive mark on many people’s lives, including his friends at CHI Pulmonary Rehab. He was selfless and caring, always doing whatever he could to make others happy and feel loved. He did his best to remember to call all of his children and grandchildren on their birthday.

Louie loved old country music, and his favorite song was “Lord help me be the kind of person my dog thinks I am”, by the Bellamy Brothers. Through the years, Louie enjoyed many hobbies including fishing, puzzles, bingo, crocheting, sewing, and making red-eye. He especially enjoyed spending time with his family whom he was very proud of.

Live stream of funeral service will be provided by Spirit of Life Church facebook page: https://www.facebook.com/spiritoflifecatholicchurch/

To order memorial trees or send flowers to the family in memory of Louis Schmidt, please visit our flower store.