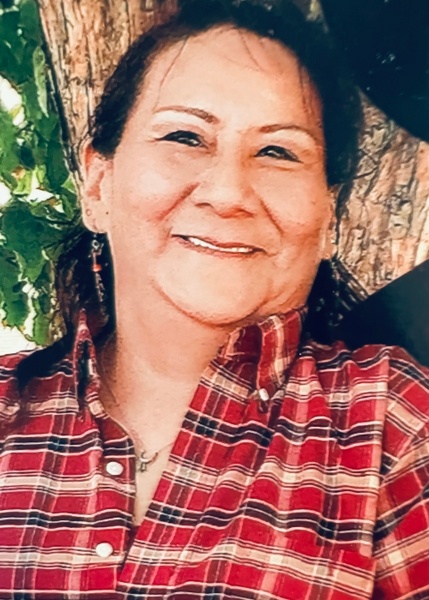 Loretta J. Kidder, 54, of Fort Yates, ND, passed away August 12, 2022 at a Bismarck hospital.  Visitation will be held from 6:00 PM to 7:00 PM Wednesday, Aug. 17th followed by a 7:00 PM Traditional Prayer Service at the Standing Rock CDC building in Fort Yates.  A brief service and final closing of her casket will be held 11:00 AM Thursday at the Standing Rock CDC building followed by a luncheon.  Burial will take place at a later date.

Loretta Jean Kidder (Insana Mani Win "Walks Alone Woman") was born April 19, 1968 to Felix Sr. and Isabelle Kidder in Fort Yates, ND.  She attended Standing Rock Elementary and High School until graduating in May 1986. After high school, Loretta met Jerome Cotanny and they married in 1988. They relocated to California from 1989-1990 before returning to Standing Rock where she started her working career. She worked at Burger Queen from 1990-1992 and White Buffalo Super Valu from 1992-1994. Loretta and Jerome divorced in 1994. She then  started work at Prairie Knights Casino in 1994-1999, Sitting Bull College as a Bookstore Manager from 1999-2003, Standing Rock Housing  Authority from 2004-2007 and finally the Standing Rock Lake Oahe Group home in 2008. While working, Loretta was able to obtain an Office Systems Degree and a Business Managment Degree while maintaining Suma Cum Laude for her 4.00 GPA throughout her college career.  The Kidder family was very active in the traditional way of life and Loretta continued to follow tradition and Sundanced from 1990-2014,  starting at Sitting Bull Sundane and finishing at her father/brother Gary's Zintkana Duta Sundance.  Loretta was always a cowgirl at heart and loved horses, dressing up western with her favorite boots and watching rodeo's when could. She  also loved being home baking cookies or making popcorn balls, spending time with her grandchildren, going to the casino, quilting if needed,  and watching crime shows and movies. Loretta also has a knack for wood burning and would wood burn designs on picture frames and crosses for family as gifts. She also liked to do some drawing in her spare time. Her Favorite NFL team was the Denver Broncos as she has always been an avid fan  and was always wearing Broncos gear. Loretta liked spending time outdoors walking and playing with her dogs, feeding the birds and any cottontail bunnies she found. She will be greatly missed by all who knew her. She was the most loving and caring Godmother, Grandmother, Aunt, and Sister.

To order memorial trees or send flowers to the family in memory of Loretta Kidder, please visit our flower store.