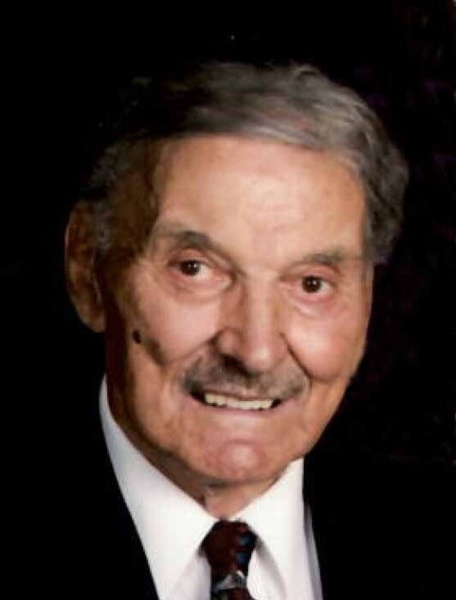 Visitation will be held Monday, July 20, 2020 from 5:00-7:00 PM at Weigel Funeral Home, Mandan, with a Knights of Columbus/St. Anthony Verein Rosary and Parish Vigil at 7:00 PM. Visitation will continue at the church one hour prior to the service on Tuesday.

Lawrence was born September 26, 1923 in Mandan to Ambrose and Bertha (Schmidt) Renner. He grew up on the family farm 12 miles southwest of Mandan and received his education at Highland School. He met the love of his life, Elizabeth (Betty) Kuntz while playing in a band at a wedding dance in Flasher, ND. They married on August 23, 1948 in Fallon, ND and enjoyed 71 years together.

Lawrence was a farmer-rancher most of his life and did custom combining. He enjoyed threshing and haying with horses at the farm in his younger years. Lawrence and Betty started farming and raising their family near St. Anthony, ND. They were blessed with several children, including their first set of twins. In 1964, they moved to their present farm south of Mandan, where a second set of twins and several more children enjoyed growing up. Lawrence raised cattle, chickens, pigs, and affectionately bought his daughters a pet lamb. He was mechanically inclined, fixing and building various items in his shop. After his retirement from farming, you could still see him driving the county roads checking the fields and watching the grain bins fill with the recent harvest. Lawrence loved to talk farming and often inquired about seeding and how the crops were doing. He started gardening in his later years, finding the perfect fertile spot behind the barn where his garden flourished. He currently has a small garden growing with the seeds he planted this spring.

Lawrence truly loved homemade food. Making and smoking sausage was a favorite pastime, something he learned from his father. Many have enjoyed his homemade red eye made with burnt sugar, many meals of chicken with cream gravy and potatoes from the garden, fresh baked bread, and chokecherry jelly made from cherries he loved to pick each year. Lawrence always said, “If you want something good, you have to make it yourself!”

Music played an important role in Lawrence’s life and Lawrence Welk inspired and influenced his musical career. He still enjoyed watching his show on Sunday nights. In 1943, Lawrence bought an alto saxophone and clarinet, took lessons, and put a band together called The 4 Trumps, later renamed The Victory Trumps. They were the most popular band at the time, playing the grand opening of Gamble Stores in Bismarck and Hebron. Lawrence said they played most of the weddings in Flasher and the surrounding areas. He also played with Jimmy Collins and the JMJ Trio. Jimmy was the best tenor saxophone man in the area, and one of Lawrence’s idols. In 1960, Lawrence put together his own band, The Lawrence Renner Orchestra, that played together for 17 years. He said, “if you want your band to go over, you have to play the tunes the people like.” Lawrence was a member of the Bismarck-Mandan Elks Band, The Bismarck-Mandan Community Band, and the West River Winds; which was like one big family.

Lawrence belonged to the Knights of Columbus, St. Anthony Verein, was a life member of the American Federation of Musicians Local 229, and the Musicians Association of Bismarck/Mandan. Lawrence had a great love for life and he and Betty traveled to just about every state in the lower 48, also to Hawaii, Alaska, and Canada. Lawrence especially enjoyed playing rummy, whist and checkers (he usually won) and watching The Wheel of Fortune.

Faith, prayer and family were an important part of Lawrence’s daily life. He said his prayers in bed and talked to Betty about the blessings and the trials of the day. He cherished the little children in his life and often said a special prayer for them.

To order memorial trees or send flowers to the family in memory of Lawrence Renner, please visit our flower store.