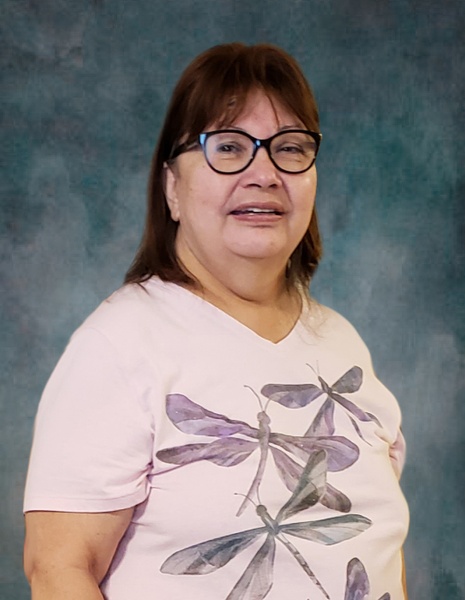 A Funeral Service will be held at 10:30 AM on Friday, August 7, 2020 at Faith Lutheran Church, Bismarck, ND with Pastor Sylvia Bull as officiant.

Visitation will be held Thursday, August 6, 2020 from 4:00-6:00 PM at St. Peter Catholic Church, Fort Yates, ND, with a Rosary/Parish Vigil at 6:00 PM. Visitation will continue at the church one hour prior to the service on Friday.

Laurie Elizabeth Yellow was born on July 20, 1956 to Arthur and Georgina (Molash) Yellow in Fort Yates ND. She was raised and educated in Fort Yates

She was married to Lonnie Lindteigen on November 15, 2002 in Bismarck ND. After graduating from Standing Rock High School she attended college in Oklahoma. Laurie transfer to Minneapolis, MN to be with her sister. She decided to further her education in Wahpeton, ND until she moved back to Fort Yates, ND to dedicate almost 20 years in Early Childhood Education. Laurie worked for the Head Start Program and the Discovery Center eventually becoming a Supervisor in her field. She also helped gain services for Special Education needs.

She decided to offer a better opportunity for her children and moved to Bismarck, ND in the summer of 2000. Laurie worked for Sykes until deciding she wanted to get an education in the medical field. Laurie embarked her journey in Health Information at United Tribes Technical College. She graduated with a Bachelors Degree on May 19th, 2003. She than decided she wanted to become a Cancer Registrar and after hard work she passed her test and got her certification on December 18th, 2003. Laurie proceeded to work for the Bismarck Cancer Center in Bismarck, ND before deciding to retire and dedicate herself to raising her grandson, completing her gift for the love and protection she had for children.

Laurie’s favorite hobbies were classic movies and TV films. Some of her favorites were Twilight Zone, Gunsmoke and especially Star Trek. Laurie enjoyed rock music from many different bands like The Rolling Stones to The Foo Fighters. She also enjoyed classical music from Claude Bussy and countless amounts from Mozart. Laurie enjoyed trying different foods and new recipes. She especially loved the local restaurant Paradiso. Feeding family and friends was very important to her. Laurie enjoyed collecting tea sets from different countries. She also collected Bear Foots statues and other black bear items because it represented her mother bear instincts. Laurie and her husband Lonnie celebrated every anniversary at the Legends Cabins in Deadwood, SD. She enjoyed taking road trips to new places but stopping off at the Prairie Knights Casino to play a few slots was a real treat for her. Laurie is known as the Yahtzee Champion to all her children and her title is still undefeated. Laurie enjoyed relaxing by the river and has many countless memories with all her family and friends. Most of all her favorite pass time was spending every moment she could with her grandchildren Mikie and Anaka.

Laurie is preceded in death by her parents, Georgina and Art Yellow; her brothers, Glen and Tim Yellow; along with many special friends.

To order memorial trees or send flowers to the family in memory of Laurie Lindteigen, please visit our flower store.