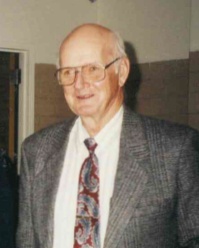 Kenny O’Neill was born on August 12, 1924 to Daniel and Henry Etta (Gauger) O’Neill in Odense, ND. After his education, Kenny lived in Fort Rice where he worked as a rancher and also worked as a mailman. He delivered packages using an airplane and during heavy snow days he would ride a snowmobile down winding country roads to ensure that the mail would make it to its destination.

In 1941, Kenny joined the United States Navy and served in both Iwo Jima and Okinawa. During his service, one of the ships he was on was attacked and he lost many friends that he had made. He was honorably discharged in 1946.

He met his wife Josephine Lockner and they were married on May 25, 1957 in Huff, ND. Together they had three sons and raised a family.

Kenny was active in the baseball community of Fort Rice where he sponsored softball teams, played on a Fort Rice baseball and fast pitch team, and acted as the scorekeeper for softball games. Kenny and Josephine also enjoyed the occasional gambling trip to various casinos. Being Kenny’s lucky charm, Josephine was known as the big winner. Kenny enjoyed other hobbies, including bowling, and playing the piano and the accordion.

To order memorial trees or send flowers to the family in memory of Kenneth O'Neill, please visit our flower store.