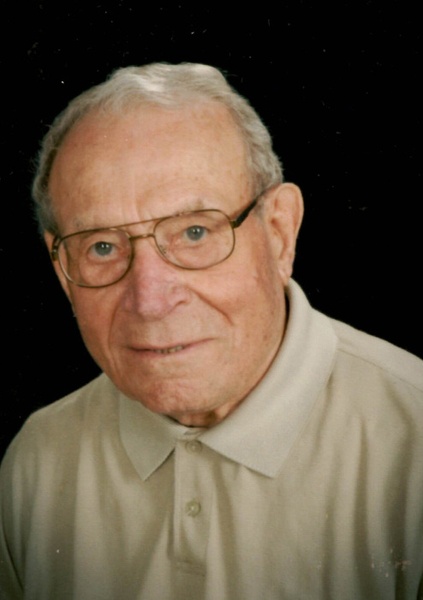 Visitation will be held Sunday, January 6, 2019 from 3:00-6:00 p.m. at Weigel Funeral Home, with a Knights of Columbus Rosary and Parish Vigil at 5:00 p.m.  Visitation will continue at the church one hour prior to the service on Monday.

Kenny was born January 23, 1922, to Charles and Amelia (Ripple) Lohstreter.  He attended St. Joseph’s Grade School and graduated from Mandan High School in 1940.  He attended North Dakota State Agricultural College until the outbreak of World War II, at which time he returned to help run the dairy farm.  In 1946, Kenny and his brother Lloyd purchased the family farm and continued in the dairy business until 1975.

Kenny married the love of his life, Leona Bullinger of Mandan, in 1949, and raised four children: Marilyn, Diane, Craig, and Bryan.

Kenny was one of the original organizers of the Mandan Rural Fire Department, and served as its chairman for one year and then served on its board of directors.

Kenny was a pioneer irrigator in Morton County and along with other interested people, helped organize the Missouri Slope Irrigators Development Association.  He served as chairman and served on its board of directors.  Kenny received the East Morton County Soil Conservation District Award in 1961, the KBOM Daily Service Award in 1965, and the North Dakota State University and Cooperative Extension Service Certificate of Achievement in 1972.  Kenny was a life member of the Elks and also a member of the Moose and Eagles Clubs.  Kenny’s commitment to service in the Knights of Columbus, his church, and his community has been an example to all who knew him, and especially to his children, grandchildren and great-grandchildren.

Kenny greatly loved his devoted wife Leona, his children, grandchildren and great-grandchildren.  He was very proud of each and every one of them and liked nothing better than spending time with them.  He left us with many wonderful memories, which we all treasure.

He is preceded in death by his parents, Charles and Amelia; one brother, Lloyd; 2 sisters, Arlene Launer and Phyllis Bailey.

In lieu of flowers, memorials may be made to St. Jude’s Children’s Research Hospital or a charity of the donor’s choice.

To order memorial trees or send flowers to the family in memory of Kenneth Lohstreter, please visit our flower store.
Open