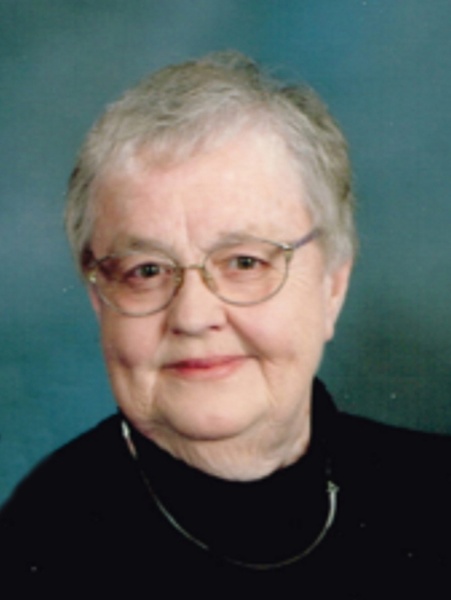 A Funeral Service will be held at 11:00 AM on Friday, February 5, 2021 at Weigel Funeral Home, Mandan, ND with Pastor Jenny Hallenbeck Orr presiding. Burial will be at Sunset Memorial Gardens, Minot, ND, immediately following the service. The service will be live streamed at www.weigelfuneral.com under June’s obituary page. For those attending please adhere to all social distancing guidelines.

Visitation will be held one hour prior to the service on Friday at Weigel Funeral Home, Mandan.

June Evelyn (Larsen) Beck, daughter of John and Evelyn (Gallup) Larsen, was born on June 6, 1939 in New England, ND. She attended all twelve grades in the New England public school system. She was the valedictorian of her graduating class in 1957.

June was a scholarship student at Jamestown College. Her major was in physical education with minors in psychology and mathematics. She graduated in 1961. In the summer of 1964, she attended Utah State, Logan, UT, on a National Science Foundation in mathematics. In 1966, she received her Master of Science Degree in Guidance and Counseling from North Dakota State University, Fargo, ND.

During the summers, while she was in college, she had jobs at Yellowstone National Park and Camp Grassick near Dawson, ND.

June’s career in education began in Watford City, ND, where she taught girls physical education and mathematics. In 1965, she accepted a position as a guidance counselor at Mandan High School where she was employed until her retirement in 1995. During this time, she was recognized as the North Dakota counselor of the year and also as the President for the state of North Dakota Personnel and Guidance Association (NDPGA).

June married Jerome Beck on May 28, 1972 at the Assembly of God Church, New England, ND. At that time, Jerome’s employment as a counselor at Williston, ND took him to counseling at Bismarck High School and later at Century High School.

The Beck’s resided in Mandan their entire married life. During the summer; however, they spent many happy hours fishing, gardening, and entertaining family and friends. June always had change in her pocket or a treat for the kids. She was generous and kind to all who knew her.

In lieu of flowers, memorials are preferred to McCabe United Methodist Church or the Alzheimer’s Association.

To order memorial trees or send flowers to the family in memory of June Beck, please visit our flower store.