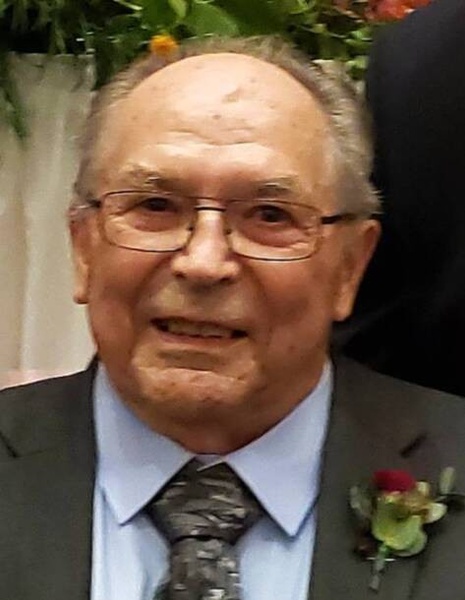 Julius Beehler, 87, passed away unexpectedly on Sunday, February 27, 2022 at Sanford Medical Center in Bismarck surrounded by his family.

Mass of Christian Burial will be held at 11:00 AM Thursday, March 3, 2022, at Christ the King Catholic Church in Mandan. Burial will follow at Mandan Union Cemetery.

Julius was born in rural Adams County on April 17, 1934 to Andrew and Margaret (Seifert) Beehler. He grew up on the farm and received his education at Haynes High School. He served in the Army from 1955 to 1957 and after an honorable discharge moved to Mandan.

Julius met and married Angie Boehm in 1961. Together they had 7 children. After Angie’s passing in 1985, he married Dorothy (Kautzman) Leingang in 1988. He welcomed Dorothy’s 6 children and their families into his life.

Julius worked at Cass-Clay Creamery and retired in 1996. The hard-working man that he was, he continued to work various jobs until the age of 85.  Julius was an original member of Christ the King Parish. He was involved in the Eagles, Moose, and Knights of Columbus. He was a member of the Teamsters. He enjoyed playing softball, horseshoes, cards and bowling as well as cheering for the Twins.

Julius was a devoted father and grandfather, attending many events that his kids and grandchildren participated.

He is proceeded in death by his parents, his wives Angie and Dorothy, and brother Alfred Beehler.

In lieu of flowers, the family requests memorials be sent to Christ the King Parish or the ND Alzheimer's Association.v

To order memorial trees or send flowers to the family in memory of Julius Beehler, please visit our flower store.