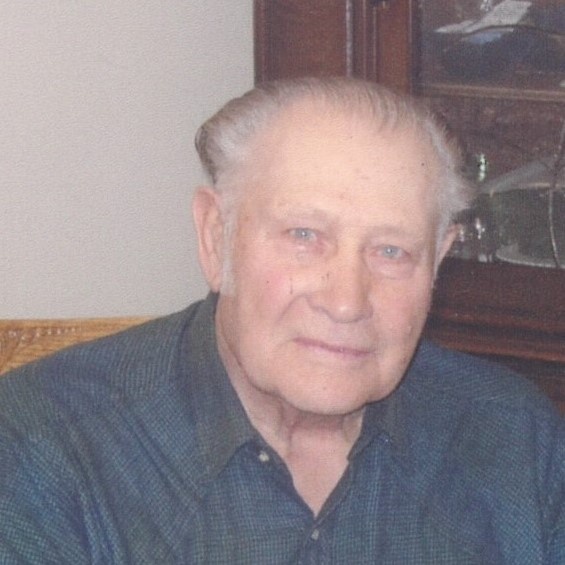 Visitation will be held at the Elm Crest Manor Chapel New Salem, ND on Sunday May 13, 2018 from 2:00 - 3:00 p.m. Visitation will continue at St. Martin's Catholic Church, Center, ND one hour prior to the service on Monday, May 14.

Joe was born in Judson, ND on October 13, 1923 to Rudolph and Margaret (Boehm) Schmidt. His early years were spent working on the family farm and coal mine. Joe married Monica Himmelspach on January 9, 1945.  He and Monica moved on the farm where he lived until his health forced him to move to Elm Crest Manor December 2017. Joe and Monica had four children and four grandchildren.

Monica did manage to drag him on a few trips to Las Vegas, South Dakota and the New England states, but his mind was always on what he was missing at home on the farm. He did enjoy an annual fishing trip to Northern Canada with Monica and his son Kenneth.

The last 5 months of Joe's life were spent at Elm Crest Manor nursing home where he visited with staff and residents regarding his life on the farm. He loved discussing politics and the weather was always of interest to him. He attended music programs provided by the home particularly whenever accordion music was played. In his younger days Joe played the accordion and the harmonica.  He and Monica loved to dance waltzes  and polkas.

The family thanks the staff at Elm Crest Manor for their  kindness and care.  They said "We will miss him, he kept us on our toes".

Joe is also survived by his brothers-in-law Bill (Josie), David (Linda) and Eugene Himmelspach (Lila) and a sister-in-law Irene Kraft.

Joe was preceded in death by his  wife Monica his son Ronald, his parents, a sister Kathryn (Phillip) and brothers Frank (Isabelle), Simon, Raymond and Adam Schmidt(infant).

In lieu of flowers, memorials can be made to St. Martin's Catholic Church or Oliver County Ambulance.

To order memorial trees or send flowers to the family in memory of Joseph (Joe) Schmidt, please visit our flower store.