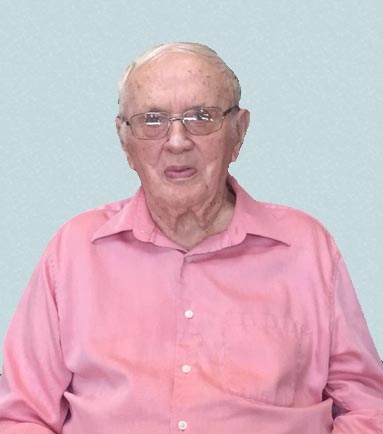 John A. Hatzenbuhler, 97, Mandan, passed away August 4, 2017 at Miller Pointe in Mandan, surrounded by his family.

Mass of Christian Burial will be held at 10:30 am on Tuesday, August 8, 2017 at Christ the King Catholic Church, Mandan, ND with Rev. Nick Schneider as celebrant. Burial will be at North Dakota Veterans Cemetery with Military Honors provided by the Mandan VFW Post #707 and the American Legion Post #40.

Visitation will be held Monday, August 7, 2017 from 5:00-8:00 pm at Weigel Funeral Home, with a Knights of Columbus Rosary at 7:00 pm, followed by a Parish Vigil at 7:15 pm. Visitation will continue at the church one hour prior to the service on Tuesday.

John was born November 13, 1919 on the family farm near Odense where he was raised and educated. He was the oldest son of Anton and Julia (Scheetz) Hatzenbuhler. In 1942, John entered the Army and served in Germany, where he earned a Purple Heart. Upon returning from WWII in 1945 he married Ann M. Schmidt on June 3, 1946. Together they lived and worked on the farm, until 1956 when John purchased a bar and moved to Solen. He owned and operated the Lucky Strike Bar, which he named, until retiring and moving to Mandan in 1976.

John and his wife enjoyed traveling with the family to California to visit Ann’s family. Later in life, they enjoyed going to Las Vegas and the Prairie Knights Casino. John was very active at Christ the King as a Eucharistic Minister and as a member of the Knights of Columbus. John was a volunteer with Meals on Wheels, and he was a 60 year member of the American Legion Post #40. John was a very gentle, kind and loving person. He was a wonderful father and grandfather.

The family would like to thank the staff at Miller Pointe for their wonderful care of their father.
To order memorial trees or send flowers to the family in memory of John Hatzenbuhler, please visit our flower store.