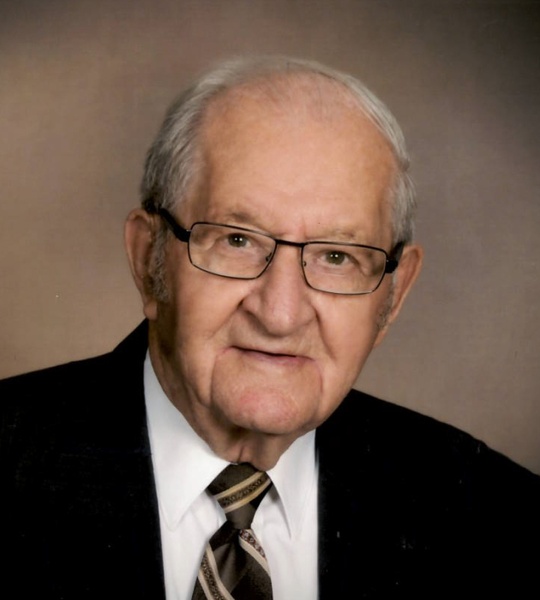 John Geiger, 98, of Bismarck, went to heaven on the morning of October 1, 2020, at St. Gabriel’s Community, Bismarck.

John Geiger was born on July 23, 1922, to Christ and Clementine (Barnhardt) Geiger at the family farm near St. Vincent, ND. Little did Christ and Clementine know that their little bundle of sweet innocence would grow into a man with the worrisome combination of rugged good looks, strong stature, charm, and swift temper.

John attended Yucca School. In 1941, he met Betty Schaaf at Hudson Hall. On weekends you would find them dancing at Harmon, Yucca School, or Hudson Hall. They married in November 1943, in Glen Ullin and moved northeast of Center where they farmed until 1973. They then relocated to Mandan in 1974, where John worked for Mandan Chrysler/Plymouth, Fort Lincoln State Park, and the Mandan Finder. When John finally retired, he and Betty loved to travel. Their travels took them to Germany to witness the birth of their first granddaughter, and then to Spain to attend another granddaughter’s wedding.

John was a member of St. Joseph’s Catholic Church, 4-H leader, member of Knights of Columbus, St. Anthony Verein, and an honorary Old Settler of Oliver County in 2014.

After his wife Betty died in 1993, John had the privilege to marry again. He and Frances Kary exchanged vows in 1994, and through this union, five children were added to the family:  Arnold Kary (deceased), Susan (Jim) Gierman of Minot, Nancy (David) Stephan of Lake Havasu, Leon (Annette) Kary of Mandan, and Joseph (Maureen) Kary of Fargo. From this union, John, gained an additional 12 grandchildren, and 20 great-grandchildren.

John and Fran moved to assisted living at St. Gabriel’s Community in Bismarck in 2018. Unfortunately, their time together at St. Gabriel’s was short-lived. After 25 years of marriage, Fran died unexpectedly in 2019.

There are no longer many siblings, cousins, or friends to mourn Johnny-the life of the party outlived them all! However, he will be deeply missed by the generation that followed him and adored him, and tales of his deeds will continue to be told.

A heartfelt thank you to the St. Gabriel’s Community Staff for the wonderful care he received while living there.

To order memorial trees or send flowers to the family in memory of John Geiger, please visit our flower store.