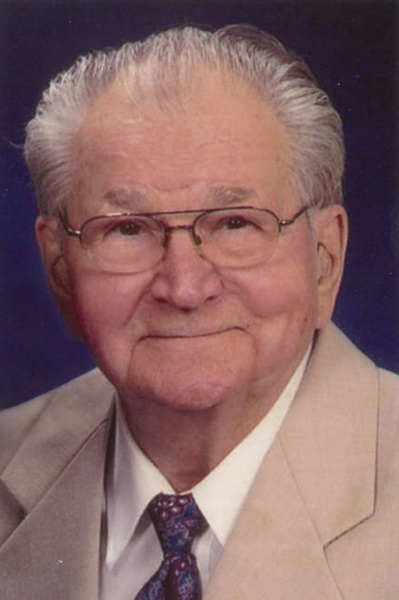 Mass of Christian Burial will be held at 10:30 am on Monday, March 12, 2018 at Church of St. Joseph, Mandan, ND with Rev. Greg Lugar as celebrant. Burial will be at Mandan Union Cemetery.

Visitation will be held Sunday, March 11, 2018 from 5:00-8:00 pm at Weigel Funeral Home, with a Rosary/Parish Vigil at 7:00 pm. Visitation will continue at the church one hour prior to the service on Monday.

John was born on October 30, 1925 to Anton and Rosemary (Dietrich) Berger in Crown Butte, ND. He attended school in the Crown Butte area and graduated from the Abbey in Richardton as Valedictorian. After graduating John worked for Lockbeam Hardware and then began working with his father at Berger Trucking. On October 7, 1947 he married Rose Yantzer at St. Vincent Catholic Church in Crown Butte. He owned 3 different gas stations in Mandan before having to get out of this line work due to health reasons, which is when he started Berger Construction remodeling homes.  John worked side by side with Rose in the construction industry building many homes, apartments and commercial buildings in the Bismarck/Mandan area.

John enjoyed playing cards and getting together to play poker with his buddies. He was a member of the Eagles, Elks, Moose and Knights of Columbus. He enjoyed old time music and attended many dances with Rose as his dancing partner. John and Rose traveled extensively throughout the United States and abroad.

The family would like to thank the staff at CHI St. Alexius Health and St. Gabriel’s for the wonderful care that John received.

Please click here to view the video tribute
To order memorial trees or send flowers to the family in memory of John Berger, please visit our flower store.