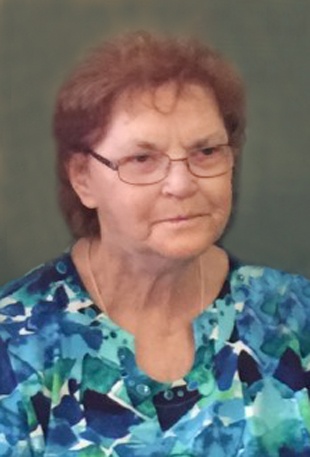 Joan Irene Feist, 85, of Bismarck, passed away May 23, 2021, at her home surrounded by her family in Bismarck.

Visitation will be held Friday, May 28, 2021, from 5:00-7:00 PM at Weigel Funeral Home, Mandan, with a Rosary/Parish Vigil at 7:00 PM. Visitation will continue at the church one hour prior to the service on Friday.

Joan Irene (McGregor) Feist was born on November 2, 1935, at home on her family's ranch to Myrtie (Halverson) and Gordon McGregor. She was the second of six children. Joan grew up with her siblings Gerald, Sharon, Janice, Gordy, and Shirley on the ranch before moving to Selfridge later in life. She graduated high school in 1954 in Selfridge.

She married Donald Feist Sr. on November 15, 1956. Joan gave birth to their son Donald Feist Jr. on December 11, 1959. Joan and Don Sr. celebrated their 53rd wedding anniversary in 2009. They made their home together west of Selfridge on a large cattle ranch. Joan was an incredibly talented rancher, the heart and soul of the Feist family operation. Throughout her life she raised up to 20 bucket calves at a time along with buffalo calves, horses, chickens, emus, cats, dogs, pigs, and a deer named Cookie. Joan was also an avid gardener, and passed along a deep love for plants and animals to her five grandchildren. Joan lived on the ranch until 2016, when she moved to Bismarck to be closer to her family. Joan moved through the world with wit, sass, sarcasm, and resilience and instilled those values in her family.

Memorials may be sent to Weigel Funeral Home in Mandan.

To order memorial trees or send flowers to the family in memory of Joan Feist, please visit our flower store.