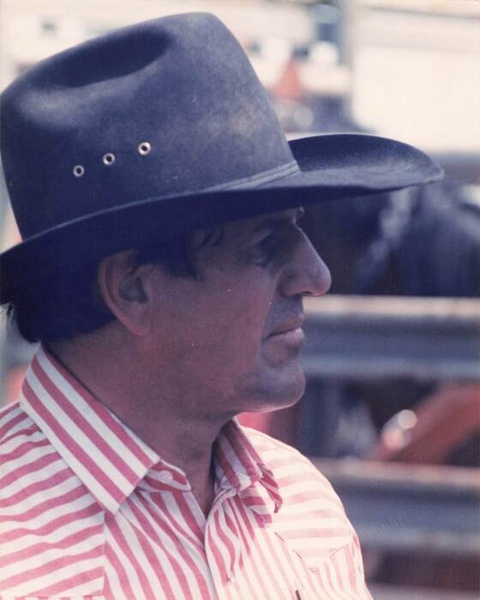 On Monday, August 16, 2021, Jim Mosbrucker, a lifelong Mandan resident and a true visionary in rodeo, passed away from a heart attack at the age of 77.

Funeral Services will be held 1:00 PM Saturday, August 21, 2021 at St. Joseph Catholic Church in Mandan with Fr. Josh Waltz as celebrant.  Burial will follow in the Mandan Union Cemetery.

Visitation will be held from 5:00 PM to 7:00 PM Friday at Weigel Funeral Home followed by a rosary and vigil service at 7:00 PM.

Jim was born on December 15, 1943 in Mandan, ND. He married his high school sweetheart, Marge (Bobb) Mosbrucker, who together raised four children, Kelly, Shelly, Marty, and Wally. Jim had a passion for rodeo and started as a pick-up man in 1968 and was voted Pickup – Man of the Year many times. One of his proudest moments was when he and Toby Backsen were selected to be the pickup men at the North American Rodeo Commission Finals in Gallup, New Mexico.

Jim’s true passion was bucking horses. In 1978, Jim, Marge, and their children started their own stock contracting company that still continues today, 43 years later. Jim always had an eye for picking out bucking horses and one of his proudest achievements was when he purchased a horse named Moonstruck who became world famous and was one of the foundation studs for the breeding program. Jim always believed the success of a rodeo had to do with the caliber of the stock and the quality of cowboys. Jim was instrumental in forming the National Professional Rodeo Association in 1986.  Mosbrucker Rodeo horses have won awards in numerous decades and associations since the start. In 2007, at the NFR in Las Vegas, NV, the horse Magic Wars set the arena record with Will Lowe and a score of 91.5 points that stood for 10 years and was also named Bareback Horse of the Finals.  Also that year, they won three rounds at the NFR on War Chick, Silver Moon, and Magic Wars. He died doing what he loved, taking care of his bucking horses. Jim would always say, “You have to take care of them if you want them to buck.” He always made sure the horses were well fed and in the best shape to perform.

Jim was preceded in death by his parents, John and Josephine Mosbrucker, and daughter, Shelly Brink.

To order memorial trees or send flowers to the family in memory of James "Jim" Mosbrucker, please visit our flower store.