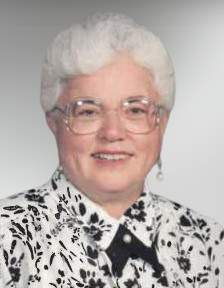 Mass of Christian burial will be held at 10:30 AM on Friday, June 17, 2022, at St. Joseph Catholic Church, Mandan.  In July of 2015, Isabelle decided to donate her body to science.  Burial will be in Flasher at a later date.

Isabelle was born April 22, 1932, to Michael and Rosa (Schmidt) Gustin in Flasher, ND. She was raised and educated in the Flasher area. She married Roger Mahrer October 3, 1950, in Flasher where they made their home and raised their 13 children.

Isabelle loved singing and playing the piano. The family could not open Christmas presents until everyone gathered around the piano and sang multiple Christmas songs. Isabelle was a very active woman, a member of the American Legion Auxiliary Schafer-Boye-Lange Unit 69 since 1956, taught CCD and was a member of the Flasher Christian Mothers and the Bismarck Catholic Daughters. She was an excellent seamstress who also loved to crochet, knit and quilt. Isabelle made a quilt for each one of her children and made baby blankets for her grandchildren. She had a huge garden and with the large brood was able to maintain it. She loved to bake, making homemade bread for many years. Her recipe for graham cracker bars won her a television stereo console in the early 70s.

Isabelle began running in the 70s and enjoyed it so much that she completed a 5K in the Jubilee Year - 1977. She and Roger bowled for many years at Meyer's Cafe and Lanes and later golfing became their passion. She also proudly earned her GED in 1987. Isabelle regularly attended Al-Anon meetings in Flasher and continued to be a part of those meetings when she and Roger moved to Mandan and Bismarck. She diligently solved the daily crossword puzzle from the Bismarck Tribune and loved to play word games, board games and cards with her children and grandchildren.

To order memorial trees or send flowers to the family in memory of Isabelle Mahrer, please visit our flower store.