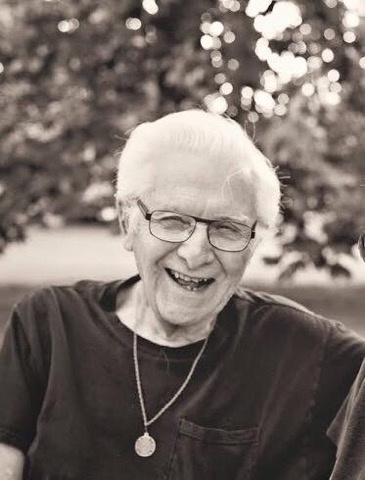 Gerald H Knudson, better known as Jerry, the fifth son of Mary and Ed Knudson, passed away on Sept 10, 2020. He was born on June 13, 1928, in Mandan, ND. He was raised and educated in Mandan, attended St Joseph’s Catholic grade school and Mandan High School, graduating in 1946. In the summer of 1946, he enlisted in the Army and spent eight months in Manila making maps of the SW Pacific. He was discharged in 1947. Upon returning home he attended St. John’s University in Collegeville, Minnesota ,and finished his education at the University of ND with a BS in Business Administration.

While at college he met Eleanor Benson. They were married in August of 1951. In November of that same year, he was called to active duty during the Korean conflict as an officer in the USAF and served at Lake Charles Air Base, LA. Upon the death of his mother and father in 1952 and ‘53, he resigned his commission in the AF, to come home and share responsibility of the family business Crescent Printing Company, with his brothers, Myles and Richard. He purchased his brothers' interests in Crescent Printing in 1954 and remained sole owner until the time of his retirement in 1992. He served on many boards, including nine years on the MHS school board (59-68), served on the hospital board that built the Mandan hospital, was active in the Chamber of Commerce, American Legion, the Knights of Columbus, was an officer in the 4th Degree Knights of Columbus and was instrumental in the formation of the Mandan Fr DeSmet Assembly. He was active in Elks, Kiwanis, and Rotary. He was an active member of Christ the King parish, serving as one of the first Eucharistic lay ministers and also ran the CCD program for a year. He served in prison ministry, Kairos, for 10 years and served as the National Director of Kairos International. He was an active member of the Cursillo movement from the 1960’s to the present. He was asked by the bishops of Fargo and Bismarck to work with the ND legislature on anti-pornography bills and did so for one session.

Like many men, Jerry lived and worked and had a family. However, his greatest legacy is in his gift of service to others. This is evidenced in his work in numerous local civic groups. His faith and love of the Lord grew from the model of his parents and his involvement in Cursillo. Along with his wife, Eleanor, he attended to the elderly at various nursing homes, visiting and bringing Eucharist. His greatest joy in life was in bringing Eucharist to shut-ins and the elderly.

Jerry was preceded in death by his parents, Ed and Mary Knudson, brothers, Eddie, Dick, Emmanuel, and Myles, and by 3 children: Mary, Steve ,and Hank.

A mass of Christian Burial for Jerry  will be held at 10:30 am on Thursday, September 17, 2020 at Christ the King Catholic Church, Mandan, ND with Reverend Fred Harvey as celebrant.  Burial to follow at Mandan Union Cemetery.

In lieu of flowers, donations can be made to Christ the King Catholic Church, University of Mary, Assumption Abbey of Richardton, or Catholic Indian Mission, Ft. Yates.

To order memorial trees or send flowers to the family in memory of Gerald Knudson, please visit our flower store.