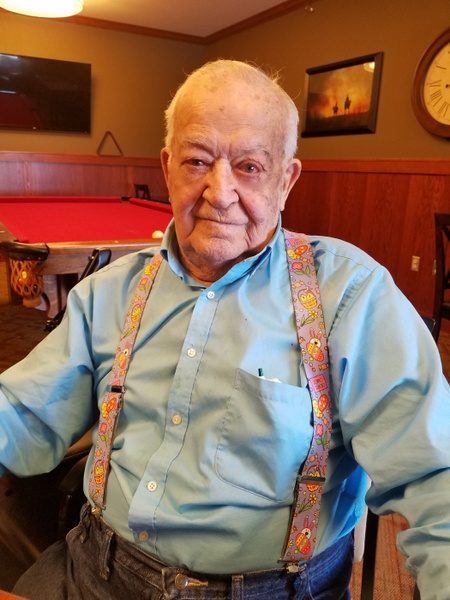 Frank Leingang, 91, Mandan, was called home by the heavenly Father on November 21, 2020, of natural causes.

At a later date, there will be a Memorial Service for family and friends to celebrate Frank’s life.

A private Mass of Christian Burial will be held at 10:30 AM on Wednesday, November 25, 2020, at St. Joseph Catholic Church, Mandan, ND with Rev. Dennis Schafer and Rev. Josh Waltz as celebrants. Burial will be at Mandan Union Cemetery.

The funeral service will be live-streamed on the Weigel Funeral Home website. To watch go into Frank’s obituary page and scroll down.

Frank was born on April 10, 1929, in a small farmhouse on the land that his grandfather had homesteaded south of St. Anthony. He was the oldest of 12 children born to George and Rose (Haider) and grew up on the family farm.

Frank worked hard during the day helping to build Highway 6 with his tractor and plow to earn money to buy the love of his life, Eileen Bullinger, an engagement ring. Then working at night to finish the farm work. On October 21, 1952, Frank and Eileen were married at St. Anthony Catholic Church. Together, they farmed for 50 years, raising eight children south of St. Anthony. After retiring from farming, they moved to Bismarck in 1992.

Frank was a member of the St. Anthony Verein and served as Recording Secretary. He was also on the church council. He served on the Board of Directors for the Mandan Farmer’s Union Elevator, and was a member of the Knights of Columbus, the Moose, the Eagles, and the Elks.

Frank loved learning and every evening after working in the field, he would be found reading encyclopedias and watching educational documentaries. It was important to him that all his children received a good education. Frank was known for his quick wit, jokes, pranking, and his storytelling. He loved to make people laugh. One of his favorite jokes was: “I am so old that when I was a kid the rainbow was in black and white!”.

Frank’s last residence was at Edgewood Vista in Mandan, ND. He made many friends with the residents and staff. He enjoyed playing cards, playing bingo, and making people laugh. They became part of his extended family and took good care of him, especially his granddaughter, Franscesca Friedland.

Frank was blessed with 22 grandchildren and 14 great-grandchildren (1 on the way). He loved to tell them stories, play cards and visit with them.

The family would like to thank the staff of Sanford Hospital for the wonderful care they gave our dad while in the hospital.

Thank you, Dad and Mom, for giving us the wealth of a large loving family who are always there for each other.

To order memorial trees or send flowers to the family in memory of Frank Leingang, please visit our flower store.