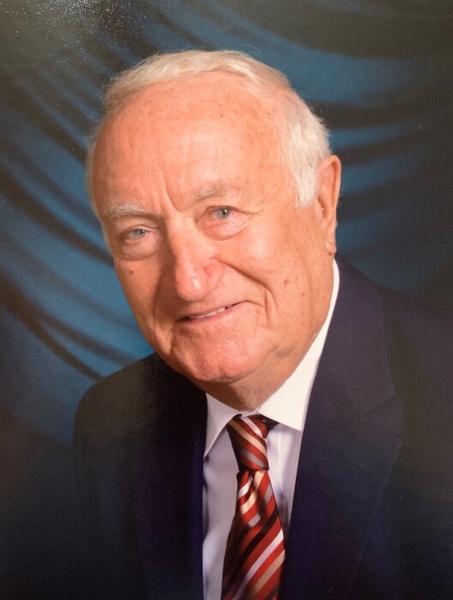 Frank Edward Boehm, 88, Mandan, went to his heavenly home in the early morning of October 28, 2020 at CHI St. Alexius Hospital surrounded by his wife and three children.

A Mass of Christian Burial will be held at 1:30 PM on Monday, November 2, 2020, at St. Joseph Catholic Church, Mandan, ND with Msgr. Patrick Schumacher as celebrant. For everyone’s safety, the family is asking those attending to follow social distancing and to wear a mask. Burial will immediately follow at the North Dakota Veterans Cemetery.

Frank Edward Boehm was born August 15, 1932, to Alexander and Elizabeth (Matz) Boehm and was raised on a farm seven miles west of Mandan with his 10 siblings. In 1953, Frank was drafted into the U.S. Army and served 20 months in Germany. The year 1955, was a big year for Frank; he was discharged from the Army and found employment at Cass-Clay Dairy where he worked until he retired after 39 years of service.  Most importantly, that was the year he married his soul mate Angela (Angie) Wetsch on June 27th at St. Joseph’s Catholic Church.

Frank served nine years on the School Board at St. Joseph’s School and was also PTO president.  Frank and Angie were ministers of the Holy Eucharist and took communion to area nursing homes for many years.  Frank was active in his church being a lecture and serving three years as a parish trustee. Frank and Angie also did volunteer work for the Theodore Roosevelt Medora Foundation in Bismarck. A highlight of each summer was doing volunteer work in Medora, which they did for 16 years.

In 1965, Frank joined the Knights of Columbus Council #2760.  He served in many capacities including Catholic Activities Chairman, Chief Squire Counselor and Lenten Catholic Quiz Team that won State four years in a row.  He was a Grand Knight and felt honored to lead the rosary for many of his fellow Knights.  Frank became a Sir Knight in 1970 and served as Faithful Navigator of Fr. DeSmet Assembly #785 and was also the District Deputy of District 6.  In 1983, Frank was Knight of the Year.

In May of 2016, a highlight for Frank was taking part in an Honor Flight to Washington, D.C.  His son, Jeff, was able to accompany him and together they visited Arlington National Cemetery and many other historic monuments.

Frank lived a life to the fullest enjoying time with his family and friends.  His favorite catch phrase was, “This is livin’!!!”

To order memorial trees or send flowers to the family in memory of Frank Boehm, please visit our flower store.