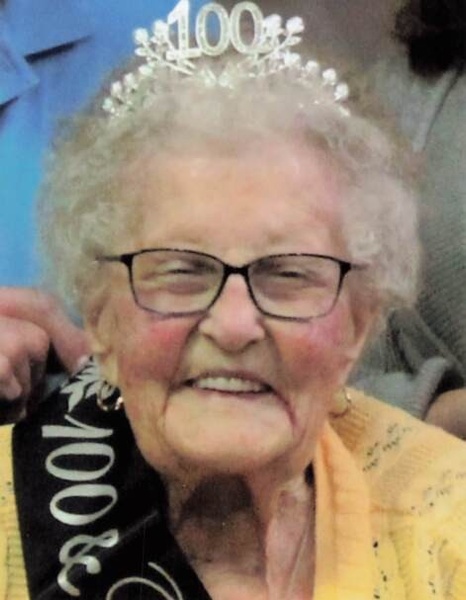 After more than a century, Frances J. Berger’s battle with acting her age came to a close on March 25, 2022.

A Mass of Christian Burial will be held at 11:00 AM on Friday, April 1, 2022, at St. Vincent Church, Crown Butte, ND with Father Nick Schneider as celebrant. Burial will be at Mandan Union Cemetery.

Frances was born at home on August 29, 1921 near Crown Butte, northwest of Mandan, ND, a happy day for her beloved parents John J. and Clementine (Barnhardt) Schlosser, and was the oldest of two daughters.  Mathilda (Tille Miller) Schlosser completed their little family three years later.

A self-proclaimed “curious child”, Frances was out-going, tenacious, and to read between the lines, sometimes mischievous.  She loved living and growing up nearby her paternal uncles, aunts, and cousins of whom lovingly referred to her as Little Frances since an older cousin already shared the name.  Frances attended country school and graduated from the 8th grade.

Frances was a lifelong member of the St. Vincent de Paul parish, Crown Butte, ND.  She appreciated that she was baptized, confirmed, and married at St. Vincent’s.  Her wish was to have her funeral at St. Vincent’s and so it shall be.

It was at St. Vincent’s that she first met Lawrence K. Berger when she was 4 years old and he was 8 years old.  That summer her mother took Frances to the Berger farm to visit Lawrence’s sister-in-law Rosemary, who was Clementine’s cousin.  During this visit Lawrence asked Frances to go pick cherries with him and some of his siblings, and so began their courtship.

Frances enjoyed working alongside her dad on the farm.  Since she was the oldest, she helped him work the fields, harvest, and put up hay with their teams of horses.  Frances adored all animals.  When her dad would be far enough ahead and was out of view, she’d oftentimes stop to give her horses a break so they could graze and rest a little.  Frances learned to drive and got her driver’s license when she was 14 so that she could help more around the farm, including driving to town to get parts.  When Frances’s dad bought his first tractor, the salesman first taught Frances to drive the tractor, and then she taught her dad how to use it.

Frances learned to sew and embroider from her mother and became an incredible seamstress who was able to sew whatever she wanted, sometimes creating her own patterns. She took violin lessons as a child and learned from her dad how to dance Polka and Waltzes.  She and Lawrence would become outstanding dance partners.  They seldom missed a weekend of dancing at one of the various clubs to which they belonged.  Frances’s love of polka music would remain constant throughout her entire life.  She taught her grandchildren to Polka and Waltz by practicing around the kitchen table while listening to the Polka Party on Sundays from Noon-2:00pm on 1130AM KBMR.

After 15 years of courting, Frances and Lawrence married on April 14, 1941.  They moved into the Berger family house on the Berger homestead about 5 miles from where Frances grew up.  They began farming with Lawrence’s brothers and were married for 62 years when Lawrence passed away on July 6, 2003.  Their early years of marriage were not ideal as Lawrence was drafted into the US Army and left for training in April 1942.  Luckily, Frances was able to travel with Lawrence while he was training stateside.  During this time, they would live in Minnesota, Indiana, Illinois, and Mississippi.  Frances recalled her favorite time of day was watching Reveille first thing in the morning.  Frances often took on jobs during this time including as a nanny for twin girls, working in a store, and working in the laundry on one of the bases.   Lawrence shipped out in 1942 and Frances made the long, sad train ride home alone where she would move in again with her parents and Tillie until Lawrence returned from WWII in late fall of 1945.  They then moved back to the Berger home and started farming again.

On November 28, 1951, Larry was born to Frances and Lawrence and Della joined them on April 9th, 1959.  The Berger family farmed and ranched until retirement in 1975.  They raised shorthorn cattle and small grains, milked and sold cream, raised chickens and sold eggs, put up huge gardens which were harvested and the produce used and canned and stored for the winter months. In between the outside work, Frances found time to make family-favorite goodies including snowballs, dry donuts, homemade caramels, and homemade maple nut ice cream.

Along the way all kinds of animals, big and small, were raised on the farm and many ended up being pets, including turkeys, geese, ducks, a sheep named Patsy, guinea fowl (Frances was always curious), a racoon named Mikey, plus many much-loved dogs, scores of rabbits, aquariums of fish, guinea pigs, pet mice, and too many kitties to count.

Della married Ben Kopp in 1977 and Lee and Dawn showed up quite shortly after.  Lee & Dawn spent a whole bunch of time and many days at Grandpa and Grandma Berger’s house.  Grandma made sure to keep Schwan’s fudgesicles in the freezer for Lee and a variety of dried fruit in the cupboard next to the sink for Dawn.

Lee married Alaina in 2010, and a bit later Macy & Evan joined the crew.  Frances loved being a great-grandma too and always hoped to live long enough to meet her great grandchildren.  We are all so lucky that she did.

Throughout the 100 years and 7 months that Frances spent earthside, she saw it all: rural electricity, indoor running water, invention of television, colorized television, wind up to rotary-to push button-to cordless-to cell phones, the invention of the internet.  Frances did not lack for hobbies or things that interested her.  Frances loved to drive and drive fast.  The only reason she stopped driving at age 96 was because her right knee wore down.  Frances learned carpentry from her oldest brother-in-law and built all of the closets in her house, just as a start.  Frances continued to sew into her 90s and was an excellent shopper.  Shopping for fabric was one of Frances’s favorite pastimes, much to the exhaustion of her kids and/or grandkids who ended up spending what seemed like endless hours - maybe time literally stopped - at So-Fro, Joanne’s, and what became Hancock Fabrics.  Frances made the basement into her sewing room and had shelves full of fabric, thread & bobbins, notions & tools, and everything the best seamstress could ever need.  After returning home, Frances would bring in the bags of fabric from the week’s fabric buying and immediately throw them down the basement steps, thinking Lawrence didn’t know.  He always knew what that “thud” was as the bags hit the bottom landing.

Everyone and everything loved Frances.  Besides humans and animals, all plants wanted to grow for her.  She loved to “experiment” with unique plant species and varieties.  She seemingly just needed to breathe on a struggling flower or vegetable plant, and it would produce a bumper crop.  Frances also enjoyed experimenting with new foods and “could eat anything”.  She introduced her family early to kiwi and other tropical fruits and loved onions and putting salsa on most anything.  Powder sugar frosting was the bane of her taste buds, but she loved marshmallows, Peeps at Easter, and cotton candy, and considered no amount of coconut to be too much.

Frances was not a person to take no for an answer, and her childhood tenacity proved her well into adulthood and the eight decades that followed.  She was particular and precise, effortlessly graceful and stylish.  She was sharp and always willing to share memories.  She was a patient teacher albeit a stickler for details.  She was loved and adored, and we will all miss her so very much.

Frances is survived by her son, Larry F. Berger, MD, Eden Prairie, MN, daughter and son-in-law, Della and Ben Kopp, her grandson and granddaughter-in-law, Lee & Alaina Kopp and their children, Macy & Evan, all of Mandan, ND, and her granddaughter, Dawn Kopp, Bismarck, ND, along with many nieces, nephews, and friends.  She was preceded in death by her husband, Lawrence, her parents, John J. & Clementine Schlosser, her in-laws, Lorenz D. and Rosa Berger, her sister and brother-in-law, Tillie & Joe Miller, and so many pets.

To order memorial trees or send flowers to the family in memory of Frances Berger, please visit our flower store.