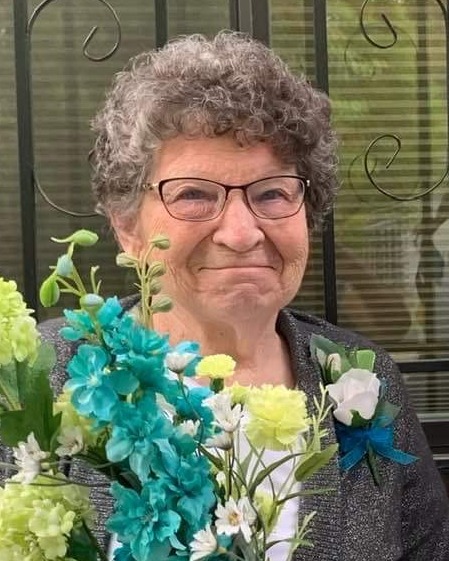 A funeral service will be held at 2 PM on Thursday, December 22, 2022, at First Lutheran Church, Mandan, with Pastor Phil Leer officiating. Burial will follow at Mandan Union Cemetery. Lunch will be served at the church after the interment.

Visitation will be held from 5-7 PM on Wednesday, December 21, 2022, at Weigel Funeral Home, Mandan, with a Remembrance Celebration and time of sharing at 7 PM.  Visitation will continue one hour prior to the service at the church on Thursday.

Born in Mobridge, SD on December 6, 1943, to Paul and Helen (Dutton) Hettich. Evelyn was the second of eight children and here her journey began to work hard and reap the benefits of her labor.

Evy’s education started in country school on the North Dakota-South Dakota border and she loved to talk about riding horse or walking to school, here she had a lifetime experience of meeting author Lois Lenski and with brother, Arlan, became a character in one of her books (Prairie School). She continued her education in Mclaughlin and Solen Public Schools.

On October 10, 1959, she married Pat Henderson at First Presbyterian in Mandan. Pat & Evy made their home on their farm south of Solen for 45 years. It was here that she became the Straw Boss. Working alongside Pat they had a small dairy, raised cattle, and harvested the fruits of their labor. She tirelessly milked cows, swathed and mowed hay, drove trucks, and cared for her beloved chickens. Evy loved getting her hands dirty and working hard. Together on this farm they raised their children, Connie Lyn, Peggy, Chuck, and Jeff. Side by side they endured the loss of infant son, Michael.

Evy was a homebody and although she enjoyed time away from the farm once she reached a destination, she never lost sight on the work waiting for her when they returned. Rainy days on the farm were for butchering chickens, canning, patching coveralls, and baking. Though she tried to pass those baking tips on to the next generations, many of them were by sight and touch that she takes with her.

A lifetime member of the American Legion Auxiliary, Evy also enjoyed working the Solen Election Board, playing cards with friends, and visits from relatives.

She will be deeply missed by her husband, Pat; daughters, Connie Lyn Henderson, Mandan, and Peggy (Pat) Bergin, Knoxville, TN; and son, Chuck (Tammy) Henderson, Solen, ND. Feeling her absence in their lives will be her eleven grandchildren and twenty-two great-grandchildren. Her siblings, brothers, Marvin (Barb), Larry & Farron (Marcia) Hettich, sisters, Paula (Lonnie) Schwartz and Yvonne (Kent) Stave, and sister-in-law, Shirleen Hettich will feel the absence of their big sister. Numerous nieces and nephews from the Henderson and Hettich families will also miss their Aunt Evy.

To order memorial trees or send flowers to the family in memory of Evelyn P. Henderson, please visit our flower store.