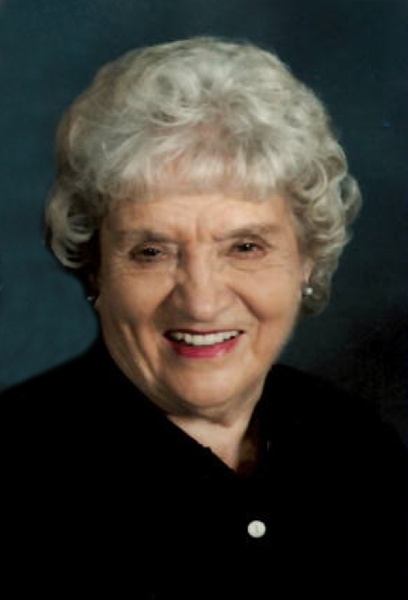 A Mass of Christian Burial will be held at 11:00 AM on Friday, September 11, 2020 at Spirit of Life Catholic Church, Mandan, ND with Reverend Todd Kreitinger as celebrant. Burial to follow at Mandan Union Cemetery.

Eva Hoffman was born on January 24, 1926 to Peter and Kathryn (Wetsch) Hoffman. Growing up on a farm near St. Anthony, she attended St. Anthony Catholic School through 8th grade. Her family later moved to Mandan, where she worked at the Red Owl lunch counter as a waitress.

Eva married Frank Helbling on October 14, 1946 in St. Anthony. The couple farmed in the area and purchased the Helbling Homestead in the early 1960s. In addition, Eva worked as the postmaster at the St. Anthony Post Office for 30 years before retiring in 1991. During this time, Frank and Eva raised seven children:  Ronald, Susan, Wayne, Richard, Patricia, John and Pamela.

Outside of work, Eva enjoyed cooking and baking traditional German food, vegetable and flower gardening, as well as doing craft work and crocheting. She was a longtime member of Women of the Moose and enjoyed participating in club activities. It also never took much persuasion for Eva to drop everything and go fishing. After retirement, she and Frank took the opportunity to travel. Some of their highlights included driving the Alaskan Highway and a trip to Central Europe with their son, Ron and his late wife, Deb.

To order memorial trees or send flowers to the family in memory of Eva Helbling, please visit our flower store.