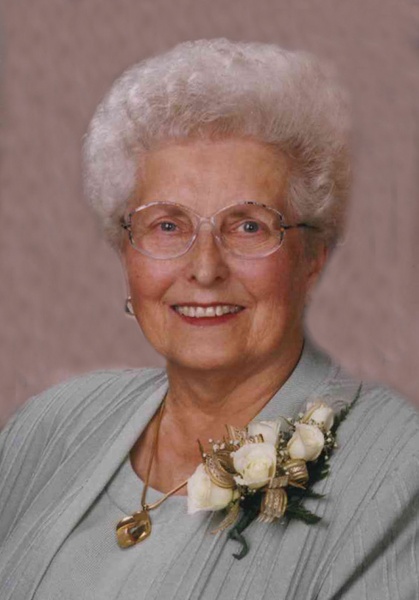 Emma Jablonski, 88, of Mandan died on Thursday, September 14, 2017 at Miller Pointe – A Prospera Community. She was surrounded by her loving family.

Services will be held on Tuesday, September 19, 2017 at 10:30 a.m. at St. Joseph’s Catholic Church, 108 3rd St NE, Mandan, with Rev. Shane Campbell officiating. Burial will be at the Mandan Union Cemetery.

Visitation will continue one hour before the service at St. Joseph’s Catholic Church.

Emma was born on February 21, 1929 to Louis and Albina (Pavlicek) Kovash on the family farm. She married Carl Jablonski on September 20, 1949 at the St. Peter of Paul Catholic Church in New Hradec, North Dakota. They moved to Livingston, Montana, where Carl worked for the Northern Pacific Railroad. Later they moved to Glendive, Montana and then to Bowman, North Dakota. Finally in 1960, the couple moved to Mandan, North Dakota.

Many evenings and weekends were spent at the baseball diamonds, rooting for one of many teams they sponsored.  Emma and Carl both found joy in traveling.

Emma was a devoted mother, grandmother, and great-grandmother. Her grandchildren always enjoyed sleepovers with grandma where they would watch movies, eat popcorn and flat pancakes.  Emma's delicious home cooked meals, card games, and old time music were always present.  Holidays were very important to Emma and she loved having friends and family around - it was her pride and joy.  She worked for the Mandan Elks. She was also a member of St. Joseph's Catholic Church and a Catholic Daughter for over fifty years.

To order memorial trees or send flowers to the family in memory of Emma Jablonski, please visit our flower store.