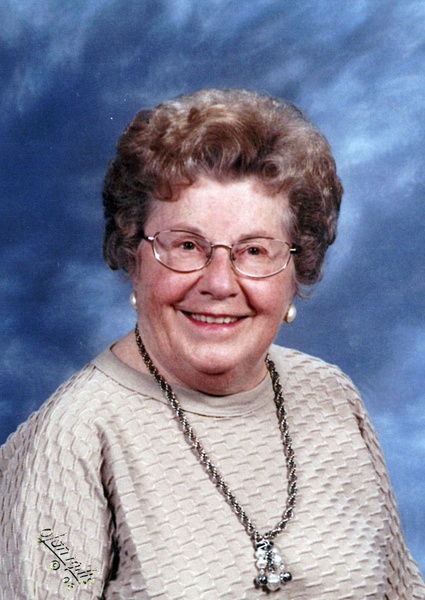 Mass of Christian Burial will be held at 10:30 am on Tuesday, April 18, 2017 at Christ the King Catholic Church, Mandan, ND with Rev. Nick Schneider as celebrant. Burial will be at North Dakota Veterans Cemetery.

Visitation will be held Monday, April 17, 2017 from 4:00-8:00 pm at Weigel Funeral Home, with a Rosary/Parish Vigil at 7:00 pm. Visitation will continue at the church one hour prior to the service on Tuesday.

Elsie was born on February 13, 1925 to George and Minnie (Nelson) Glaser in Mandan, ND. She was raised and educated in Mandan and graduated from Mandan High School in 1943. She worked in the office at the Mandan Creamery and later at Dahner's Music and Gift Shop in Mandan. On August 1, 1945, Elsie married her high school sweetheart, Christopher G. Boehm. After marriage, she began her 21 years as a military wife, moving with her husband to MacDill Air Force Base, Tampa, FL, where she worked in the Post Exchange. In 1947, they transferred to Davis-Monthan Air Force Base in Tucson, AZ, and then in 1948, they moved to Ellsworth Air Force Base in Rapid City, SD, where they were stationed for 8 years. In 1956, they were transferred overseas to High Wycombe Air Station, England, where they enjoyed living for 4 years. Returning to the United States in 1960, their new assignment was Barksdale Air Force Base in Shreveport, LA. In 1963, they transferred to Minot, ND, which was their last base assignment. Her husband, Chief Warrant Officer Christopher G. Boehm retired after 22 years of service. They made their home in Mandan, ND on December 31, 1964.

During her years as a military wife, Elsie was very active in the Officer's Wives Organization. During retirement, Elsie was a member of Christ the King Parish. She was an auxiliary member of the Retired Teacher's Assoc., Retired Officer's Auxiliary Assoc., Bismarck-Mandan Elks and Mandan American Legion and patron of the North Dakota Veterans Cemetery south of Mandan. She loved her home in Mandan, but in January of 2012, she made the move to Knife River Care Center in Beulah.

Elsie's greatest love was her family. She and Christopher spent 51 years enjoying life together, watching their children, grandchildren and great-grandchildren grow and flourish. We could not ask for more loving parents or grandparents. We miss them greatly.

In lieu of flowers the family requests memorials to the North Dakota Veterans Cemetery. Elsie's Memorial Folder'
To order memorial trees or send flowers to the family in memory of Elsie Boehm, please visit our flower store.