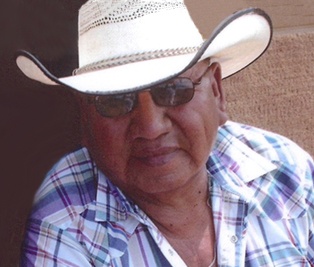 Mass of Christian Burial will be held at 11:00 am on Monday, January 8, 2018 at St. Peter Catholic Church, Fort Yates, ND with Rev. John Paul Gardner as celebrant.

Visitation will begin at 5:00 pm on Sunday, January 7, 2018 at St. Peter Catholic Church, with a Rosary and Parish Vigil at 7:00 pm. Visitation will continue at the church one hour prior to the service on Monday.

He attended St. Joseph's Catholic School in Mandan, ND. and Chamberlain Catholic Indian Mission School in Chamberlain, SD. Then continued his education at Ft. Yates High School, where he ran track and qualified for state in 1958 and 1959.

He started work at a young age, as a ranch hand at several ranches in various areas. In 1966 he began to work for the railroad, working from Mandan to Flasher, ND.  Soon after the railroad he went into construction, building the Standing Rock Group home, the St. Peters Catholic Church and the Standing Rock Community High School in Fort Yates. It was then he started his employment with Standing Rock Housing Authority where he completed 27 years of service before retiring in 2006.

He was a devoted husband, father, grandfather, and eventually great-grandfather. During his lifetime he enjoyed his time outdoors fishing and hunting. He loved to attend rodeos and in his younger days he was a member of the Cannon Ball Rodeo club. He was proud of all of his grandchildren and their accomplishments.

He was survived by his wife Joan Standing Bear, 4 sisters, 6 daughters, 2 sons, 15 grandchildren and 25 great-grandchildren. He is preceded in death by his parents, 4 brothers, 1 brother-in-law, and 2 sons.

To order memorial trees or send flowers to the family in memory of Earl Standing Bear, please visit our flower store.