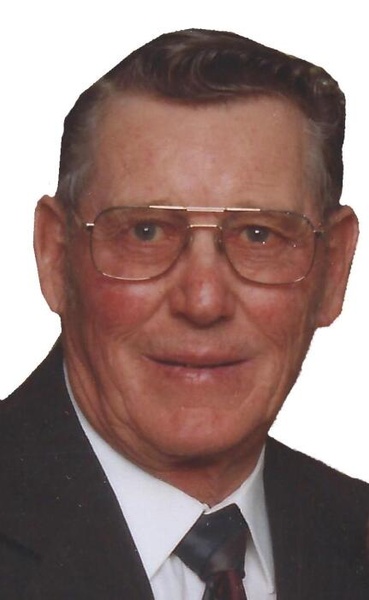 Dennis Sebastian was born August 19, 1932, at Haymarsh, the second son of Frank and Teckla (Wehri) Sebastian.  He attended St. Clement’s Catholic School at Haymarsh.   During his youth years he was active in with the Haymarsh Baseball Team, 4H, riding horse, and breaking horses.  In 1953 Dennis was drafted into the U.S. Army and served from 1953 to 1954.  He returned home to operate the family farm due to the illness of his father Frank.

Dennis and Carol were married on September 28, 1960, at Sacred Heart Catholic Church in Glen Ullin.  After their marriage they farmed 10 miles northeast of Hebron.  In 1964 they purchased the family farm from Frank and Teckla.  Dennis enjoyed being on the farm and being around the animals.  Dennis and Carol had two children; Larry and Brenda. Dennis loved his three grandchildren:  Nicole, Jodi and Brian, and his three great grandchildren: Madison, Mason and Hayley.

For a number of years Dennis painted with his dad.  After Frank retired from painting Dennis and Carol continued the family business.  As they continued to farm painting has developed into a full-time job of interior and exterior painting.  Throughout the years they have painted in the communities of:  Hebron, Glen Ullin, Dickinson, Taylor, Richardton, Gladstone, Lefor and Elgin.  Dennis and Carol are known for painting many high barns, churches, and houses in the communities of Hebron and Glen Ullin.

Dennis was active in the Knights of Columbus council in Glen Ullin, and served as the Treasurer and Financial Secretary for a long period of time.  Dennis loved attending the monthly meeting and the friendship of its members.

To order memorial trees or send flowers to the family in memory of Dennis Sebastian, please visit our flower store.