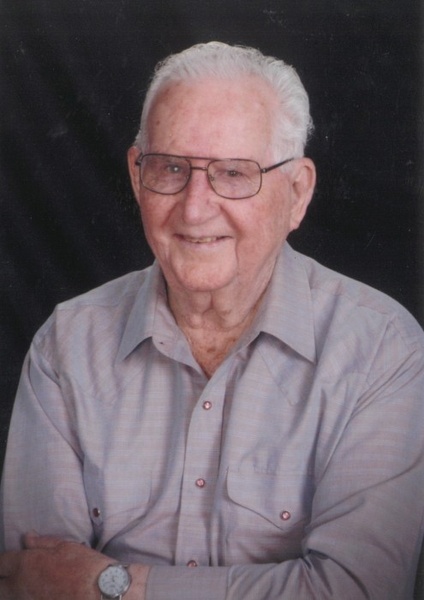 Clarence W. Morris, a kind and gentle man, passed away peacefully at his home in Mandan on May 1, 2018.  Mass of Christian burial will be 10:00 am at Christ the King Catholic Church, Mandan with the Rev. Nick Schneider as celebrant.

Visitation will be held Friday from 5:00-8:00 pm at the Agnes Larkin Center with a rosary by the Knights of Columbus at 6:30 pm and a parish rosary and vigil service at 7:00 p.m. with Deacon Dan Tuhy presiding. Visitation will continue 1 hour prior to the service at the church. Burial will be 2:00 pm at the Wing Cemetery, Wing, ND with military honors provided by Bismarck VFW.

Clarence W. Morris, son of Edward and Hazel (Ringenberg) Morris was born April 17, 1921 at St. Alexius Hospital, Bismarck.  He attended rural school in the Bismarck area.  In 1942, he enlisted in the Navy where he served in Panama for 3 ½ years.   He was united in marriage to Edna Backman on June 24, 1950.  They made their home in the Regan area where they farmed and ranched and raised their 8 children.  Edna passed in 1975.  Clarence later retired from farming and married Delores Schaff on June 6, 1989 and they made their home in Mandan where they resided until his death.  Clarence was a member of the Bismarck Fraternal Order of Eagles,  American Legion, VFW, and Knights of Columbus.  He was Township Supervisor of Canfield Twp.  He was a former member of St. Ignatius Catholic Church, Wing; and Christ the King Catholic Church, Mandan.  Clarence loved the land, having farmed and ranched all of his life. He loved to dance and play cards. Family was important to Clarence and he worked hard to take care of his family. His sense of humor and quick wit will be missed by all who knew and loved him.

In lieu of flowers Memorials are preferred to Christ the King, Wing Cemetery, Hospice, or ND Veterans Cemetery.

To order memorial trees or send flowers to the family in memory of Clarence Morris, please visit our flower store.