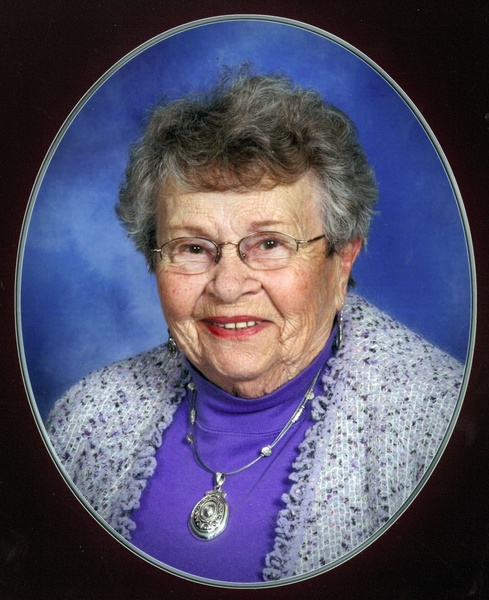 Christine B. Koch, 91, Mandan, passed away April 11, 2017 at CHI St. Alexius Health, Bismarck early enough to have her morning cookie and coffee with St. Peter.

Visitation will be held Monday, April 17, 2017 from 4:00-7:00 pm at Weigel Funeral Home, with a Catholic Daughter Rosary at 5:00 pm followed by a Parish Vigil. Visitation will continue at the church one hour prior to the service on Tuesday.

Christine Barth was born on August 5, 1925 to Philip and Katherine (Leingang) Barth in Bismarck, ND. Christine attended high school in Mandan graduating in 1943. Her first job was at the Mandan Creamery where she worked until her marriage. It was in Mandan she met her husband, Jacob (Jeff) Koch. They were married on January 10, 1946 and were blessed with 8 children, Cheryl (Larry) Souther, Sandra Hay, Barry (Jocelyn), Gregory, Michael (Marilyn), Kristlyn Thompson, Patrick (Nancy) and Blair (Ann).

Christine was very active in her children's lives enjoying the time spent with them. She also was active in St. Joseph Catholic Church, bowling, playing cards, golf, bingo and especially loving her occasional trips to the casino. One of her greatest pleasures was spending time with her grandchildren. They described her as silly, spunky, feisty, a joker and one of the most wonderful grandmas ever!

In lieu of flowers the family requests memorials be directed to St. Joseph Catholic Church and North Dakota Veteran's Cemetery.

Christine's Memorial Folder'
To order memorial trees or send flowers to the family in memory of Christine Koch, please visit our flower store.