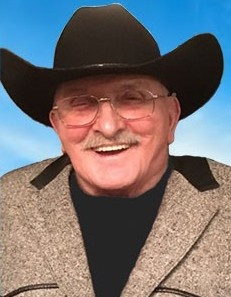 Arthur Sieglock, 88, passed away on March 17, 2020 surrounded by his loving family. A celebration of life service was held at Weigel Funeral Home, Mandan, North Dakota. Monsignor Jim Braaten officiated the service. Art was buried at the North Dakota Veteran's Cemetery in Mandan, North Dakota with military honors provided by the Bismarck VFW Post No. 1326.

Arthur Sieglock, a life-long cowboy, always wore a million-dollar smile under his cowboy hat. Art was born on December 26, 1931 near Wing, ND to Daniel and Rosa (Oswald) Sieglock, where he was raised and educated. Art was one of seventeen siblings. On the family farm, he loved haying, beekeeping, riding horses, and working around his brothers and sisters. Art enjoyed the farm life where he gardened and raised various animals from peacocks to horses.

After Art served in the U.S. Army, he met and married Geraldine One Hawk. They moved to Selfridge, ND. Art served as a member of the School Board, the City Board and as the Mayor of Selfridge. He also owned and operated "Art's Bar" and later retired to ranching.

Art spoke fluent German and was a master yodeler. Art loved his horses, honey bees, hunting, and raising German Shepherds. For fun, he attended auction sales and loved spending time with his children, grandchildren, and great-grandson.

To order memorial trees or send flowers to the family in memory of Arthur Sieglock, please visit our flower store.