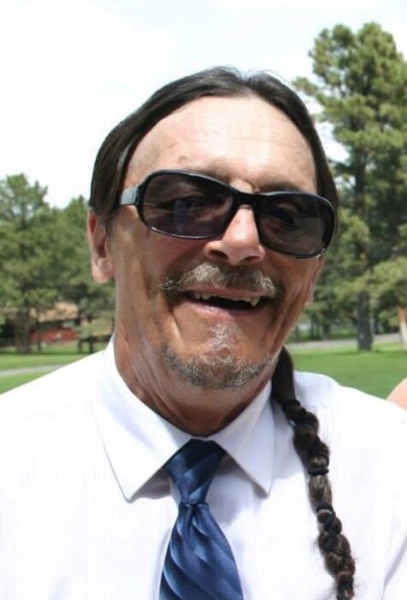 Mark Muhlhauser passed away May 18th in Minneapolis, MN with his loving wife and children by his side, following complications from heart surgery.

Visitation will be held Friday, May 27th from 5:00 PM to 7:00 PM with a time of sharing at 6:30 pm at Buehler-Larson Funeral Home in Mandan. A celebration of life service will be held 10:30 AM Saturday, May 28th at First Lutheran Church in Mandan with a lunch to follow.

Mark was born on September 26th, 1957, at the Mandan Hospital. He was raised by his parents, Bernice and Leonard Ressler in Mandan.

Mark had a 1970 Cuda, which was his pride and joy, and would frequently race local drivers on main street in Mandan. It was during one of these races that Mark suffered a severe injury, following an altercation with another driver. His injuries led to an extended stay in the hospital due to a blood clot in his left eye. Mark defied the odds against him at that early age and regained full vision in his left eye.  In high school, Mark had become good friends with the three Hartwig brothers, who also had a younger sister named Cindy. Mark would use any excuse to spend alone time with Cindy, even randomly showing up to pick her up from school each day. During his recovery from his eye injury, Mark and Cindy became closer than just friends. Within the first week of dating, Mark asked Cindy to marry him. They decided that they should wait until Cindy graduated high school and they were married on July 29, 1978.

Mark struggled with alcohol addiction when his children were young and stopped drinking 33 years ago with help of his wife, AA, his higher power, and The Heartview Foundation. He never took another drink for the rest of his life.

Mark was a jack of all trades and a knowledgeable handyman. He worked as the maintenance manager for Gateway Mall in Bismarck, ND for many years but found that this job did not allow him to spend enough time with his family and he opened his own maintenance business called Mark’s Maintenance.

Mark was an absolute lover of all animals. A pride and joy for him was having an impressive 175-gallon saltwater aquarium that spanned from wall to wall in their family living room. He had numerous saltwater fish, live coral, and invertebrates. He would spend countless hours, and money, caring for and tending to his fish tank. He also had many other pets including a tortoise, birds, parrots, lizards, hamsters, and many dogs and cats throughout the years, all of which he loved immensely.

After his children finished high school in Mandan, Mark, Cindy, and John wanted a fresh start away from the city and moved to a farm just outside of Strasburg. This is where he met a special friend and owner of the farm, Ray Nieuwsma. Together, Mark and Ray would tend the cows, always enjoying each other’s company. This is also when a special Cremello quarter horse stud named Dusty came into Mark’s life. Mark loved Dusty’s beauty and strength and always called him his “gentle giant.” Dusty was more than just a pet to Mark, and he had a special bond with him. Dusty even learned how to open his corral gates to come sit outside Mark’s window or wait for him on the porch.

Although Mark had a life filled with difficulties, he never let this affect his outlook on life. He always looked for the positive in every situation. His children recall that he outlawed the word “can’t” and it became like a swear word in their home. Anyone who knew Mark knew him to be a positive light in their life.

During a hospital stay in 2019, Mark went into respiratory arrest, became septic, required intubation, ICU care for 8 days, and hospitalization of over a month. As he had done already several times in his life, Mark defied the odds against him and made a remarkable recovery. Shortly after that time, Mark and Cindy realized that due to their health conditions, they could no longer take care of the farm and in 2020 they moved from the farm into Strasburg. Mark did what he did best and made improvements and repairs to their new home to make it their own.

Mark was an incredible father. He never missed a sporting event, band, or choir concert that his children had. His children always knew him as their safe place and each of them had a special and unique relationship with him. Being a fantastic father continued into being an even better grandfather to his three special granddaughters, whom he loved with all his heart.

He was preceded in death by his father, Leonard Ressler; his baby brother, Randy Ressler, and his mother and father-in-law, Donna, and Robert Hartwig.

Mark’s family would like to give a special thanks to all the amazing physicians and ICU staff at the University of MN Fairview. Their care over the last few months gave Mark and his family hope for a prolonged and better quality of life. Although his passing was not the outcome any of us wanted, we know that he received the absolute best care possible from his treatment team.

To order memorial trees or send flowers to the family in memory of Mark Muhlhauser, please visit our flower store.