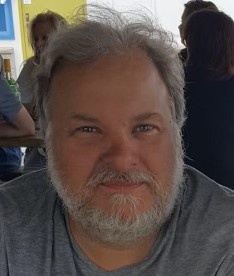 Jeffrey J. Goyne of Mandan, ND passed away on Wednesday, October 20, 2021 at St. Alexius Hospital with his family at his side.  Cremation has taken place.

A memorial service will be held 10:30 AM Saturday, October 30th, 2021 at the Mandan Moose Lodge followed by a luncheon.

Jeff was born March 8, 1966 in Dickinson to Virginia and Sidney Goyne. On this day, he took his first snowmobile ride during the “Blizzard of ‘66” to be delivered.

Jeff attended school in Mandan until moving to Dickinson in 1985 and graduating from high school in 1986.

While attending high school, Jeff worked as an auto mechanic until 2004 then began his career at BNSF Railway as a Carman until the time of his passing.

Jeff was a kind-hearted soul that cared deeply for his wife and children. Family was his priority. He tackled anything he set his mind to. He was self-taught at upholstery work, electronics, carpentry, and numerous other hobbies. His political stance was never a secret and didn’t hesitate to hold back his views. Anyone who knew Jeff knew he always had a story to tell.

Jeff is survived by his wife, Rochelle; children, Carter and Gracie of Mandan and Cole of Billings, MT; a brand new granddaughter, Ella Mae Barry, who was born 24 hours after his passing; siblings, Clayton of Dickinson, Doug (Karen) of Dickinson, Kevin of South Heart, Annette (Steve) Lesmeister of Cove, Arkansas; and many nieces and nephews.

Jeff was preceded in death by his parents, Virginia and Sidney Goyne.

To order memorial trees or send flowers to the family in memory of Jeffrey Goyne, please visit our flower store.