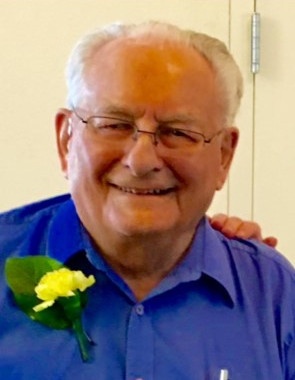 Our beloved father, Donald Rudolph Gust, entered his heavenly home on August 5, 2022, with his loving family by his side at the age of 90.

Donald was born on October 14, 1931, to Phyllis and Louis Gust in Bottineau, ND. The oldest of five, he was raised on the family farm in Kramer, ND. After high school, he attended Jamestown College. In 1952, he enlisted in Fort Silk, Oklahoma during the Korean War. After discharge, he continued his education at Dakota Business College in Fargo, ND where he met the love of his life, Betty Lou Friesen. On February 25, 1955, they married and settle in Grand Forks where their children, Sheila and Tracy, were born. In 1961, they moved to Mandan, ND where Don started his 40 year career at Kist Livestock. We used to say you can take the man off the farm but not the farm out of the man. He so enjoyed the customers he got to know over those years.

Don and Betty cherished the life they shared and raising their children. Family was always a priority. They loved doing house, yard, and gardening projects together. They enjoyed going out dancing and to dinner at the Elks and the American Legion with their friends and neighbors along with card games, picnics, and board games with family. Betty passed away in 1999.

Don loved music, especially Lawrence Welk, and he played piano beautifully. He appreciated all the simple pleasures in life whether it was reading the paper, doing crossword puzzles, reading mystery books, watching the Twins (an avid fan), playing with their little poodles, feeding the birds, or just having a good cup of coffee with a caramel roll. He loved caramel rolls!

As a talented woodworker, he built cabinetry for the house and wood frames along with lawn furniture to give as gifts. He was also a beautiful calligrapher and, in his younger days, would sign documents for companies.

As a patriotic man, he loved having a political conversation or two. Always with respect for another viewpoint.

In 2001, he retired from Kist Livestock. On October 6, 2001, he married Wilma Entzel. He so enjoyed their Alaskan cruise as a retirement gift and the many trips to Hawaii and Florida where they would join his brother, Dale, and sister-in-law, JoAnn. They moved into Somerset Court in 2009. The staff became family and he enjoyed the camaraderie with the residents. He also enjoyed the activities there. Wilma passed away in 2017.

Don always had such a congenial disposition and great sense of humor. We always admired his beautiful smile, laugh, positive attitude, integrity, and work ethic. All with a twinkle in his eye and a wink.

He shared a special bond with all his siblings and their spouses. They were all together one last time last October to celebrate his 90th birthday. Through the years, they always made sure to get photos of them lined up oldest to youngest with lots of laughs and usually a game of pinochle.

It was his nature to show gratitude and kindness to others. He will be missed and forever loved.

Don is survived by his children, Sheila and Tracy; brothers, Alfred (Luella), Richard, Dale (JoAnn); sister, Rosella; and many nieces and nephews.

He leaves a legacy of love and a lifetime of cherished memories. We could not have asked for a better father. Until we meet again Dad ~ we love you more.

To order memorial trees or send flowers to the family in memory of Donald Gust, please visit our flower store.