The history of Weigel Funeral Home and Cremation Service dates back to1881, when Hiram Lyon settled in Mandan, and purchased property once owned by Northern Pacific Railroad. Construction on his home, which is now the funeral home, was designed by a New York architect and copied after a Greek temple.  The home was completed in 1904. The large white frame structure resembles a southern plantation house with its massive pillars along the front, extending to the side to form of a carriage driveway.

A number of features are unique to the house, including the foundation, which is a two and one-half feet thick field rock. The studs measured 2" x 6" and were covered with lath and plaster both inside and out. Builders used tongue-in-groove subsiding in a diagonal pattern on the outside wall to give the structure strength. All of the wood was hand cut and much of it had to be ordered specially for the home.

The home was remodeled in the 1980's and most recently in 2011.  A total of 1,700 square feet was added at this time, and attention was given to maintaining the atmosphere of a residential home to retain the warm, informal surroundings. 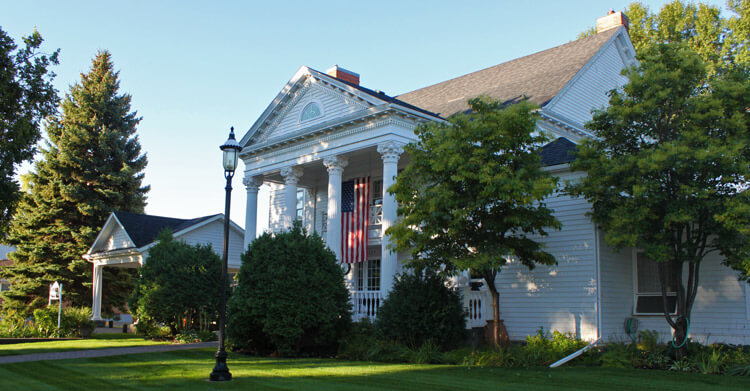 The way we say goodbye is very personal. A life that touched your heart, and the hearts of so many others, should be celebrated. You need a place where you can meet with friends and family to share memories, shed tears, and laugh as you remember the special times.

Weigel Funeral and Cremation Service will help you create that special experience, whether at our facility or at a church or facility of your choice.  We are sensitive to the unique needs of today’s family. Our first memories are created in a home, and our home is the perfect place to celebrate those final memories – in your own way.

A year of daily grief support

Our support in your time of need does not end after the funeral services.  Enter your email below to receive a grief support message from us each day for a year.  You can unsubscribe at any time.